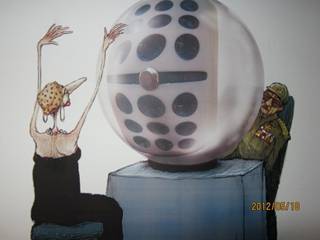 Right now the Eleventh Havana Biennial is going on. Any cultural activity that takes place on these dates, would remain, as the official language usually says, “inside the framework of the Eleventh Biennial.” But that is not the case. This exposition of alternative humor, CROCODILE SMILE, opened yesterday, May 18, 2012, just inside the box, but definitely outside the frame.

The event was organized by Estado de Sats, with the collaboration of famous Cuban cartoonists, from inside and outside the island, among which we see signatures such as Alfredo Pong, Garrincha, Carlitos, Gugulandia, Polo, Katungo, and Santana, just to name some.

Also projected were some humorous shorts sent courtesy of TeleGuamá. It was an unforgettable evening. Where adults and children, artists and public, all enjoyed ourselves.

Once the event ended some of the cartoons displayed were raffled off.