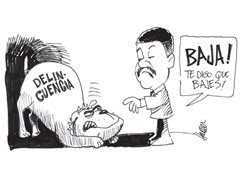 The increase in police reports and criminal trials held in the capital, were among the topics discussed a few weeks ago in a meeting among presidents of municipal courts in the former Audiencia de la Habana*, facing the Capitol.

A judge who participated in the meeting and requested anonymity, said that the filing of cases has doubled. “One of the objectives of the meeting was to strategize about the increase in crime in the capital Havana” he said.

“The Municipal Court in Central Havana has the most cases reported in the country,” confessed another judge, on condition of anonymity. However, according to figures from the National Statistics Office, until 31 December 2011, Centro Habana ranks eighth in population density, with 149,995 inhabitants.

“The Criminal Chamber of ordinary procedure (crimes carrying sentences of 1-3 years in prison) settled 132 cases this year, by July 2, similar to the number filed in 2011 up to December 12 of that year.”

“In the same court, the Criminal Chamber of summary procedure (offenses punishable with from 3 months to one year imprisonment) has already had 212 cases filed, while in 2011 it closed the year with 240 criminal cases, excluding 53 cases of complaints that are pending review,” the source said.

Police stations in Central Havana receive a total of 900 crime reports a month, the judge said, with threats, robbery with violence, theft between homosexuals, and carrying a weapon, are the most common crimes.

“By way of a solution, the police applied excessive fines to prevent cases reaching the Court. But they have imposed this measure on ex-offenders, contrary to the provisions of the Legal Code,” he said.

According to unofficial forecasts crime is expected to keep growing, with the celebration of carnival in Havana starting in mid-July. Traditionally in these celebrations, injury offenses and public disorder predominate even more.

*Translator’s note: The “Real Audiencia de la Habana” was a crown court established in 1838 when Cuba was under Spanish rule.