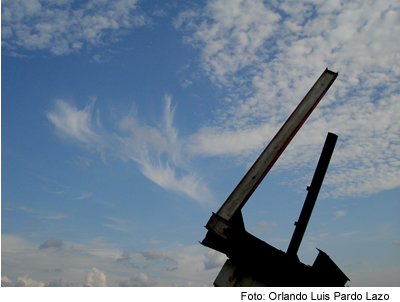 Someone has to be at the foot of the aircraft steps, to say goodbye, holding the handkerchief and wiping their eyes. Someone has to receives the letters, the brightly colored postcards, the long distance phone calls. Someone has to stay and look after the house that once was full of children and relatives, watering the plants they left and feeding the old dog that was so faithful to them. Someone has to keep the family memories, grandmother’s mahogany dresser, the wide mirror with the quicksilver coming loose in the corners. Someone has to preserve the jokes that no longer spark laughter, the negatives of the photographs never printed. Someone has to stay to stay.

This 2013, when so many await the implementation of Immigration and Travel Reform, could become a year where we say “goodby” many times. While I respect the decision of each person to settle here or there, it doesn’t fail to sadden me to see the constant bleeding of creativity and talent suffered by my country. It’s frightening to know the number of Cubans who no longer want to leave here, or raise their children on this Island, or realize their professional careers in the country. A tendency that in recent months has had me saying goodbye to colleagues and friends who leave for exile, neighbors who sell their homes to pay for a flight to some other place; acquaintances who I haven’t seen for some weeks whom I later learn are now living in Singapore or Argentina. People who are tired of waiting, of postponing their dreams.

But someone has to stay to close the door, turn the lights off and on again. Many have to stay because this country has to be reborn with fresh ideas, with young people and future proposals. At least the illusion has to stay, the regenerative capacity must remain here; the enthusiasm clings to this earth. In 2013, among the many who remain, one must definitely be hope.