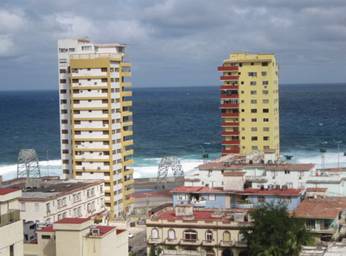 Next I am transcribing, textually, some of the statements from the current maximum Cuban authority of Higher Education (universities) that recently appeared in the official press: insufficient ideological-political and integral preparation of professors and students, limited commitment to studies, low academic efficiency and urgency to be pertinent to develop investigations with social and scientific impact; emphasis on the training of competent professionals, committed to the Revolution and the university; counting on a revolutionary group, of excellence , is a key element. Another political authority stated: to make irreversible, the little word appeared already – the universalization of Higher Education. Just as a sample it is sufficient.

One could as: What is more important? Political-ideological education or teaching? Are we going to continue with the absurd and anti-constitutional principal that the university is only for revolutionaries? With the greatest of respect for these authorities, certainly more political than educational, it would be useful to remember that higher education, or university, serves, first and foremost, to prepare highly qualified professionals, regardless of their ideological, political, religious, sexual, sports, gastronomic etc. preferences, according to the needs of the country. At least, in Cuba, it was always this way: As the rich history of the University of Havana shows, where students from all backgrounds were prepared, who played an active role in it, and later became respected professionals who with their talent and work helped the development of the nation and its many achievements in various fields. Universities and university students have a beautiful history, that doesn’t deserve to be overshadowed by cyclical intolerances, which negate precisely what a university should be: an open furnace of universal thought.

It’s worth pointing out that higher education, or the modern university, independent of the many resources invested in it and in the increase of its branches, (in many cases converting simple schools or faculties into universities, that once formed part of a single institution), has its foundations in the education system existing during the republic. As in health, education was also well rewarded and the trunk had deep roots and grew healthily. Here, nobody created anything from scratch, as is often claimed.

Some pre-Revolution facts: 3.8 university students per 1,000 inhabitants (first place together with Argentina, Uruguay and Mexico); 75.8 million pesos to Education and Culture (22.3% of annual budget expenditures compared to Latin America, only surpassed in the eighties by some countries like Costa Rica, Ecuador, etc.); 23.6% illiteracy (second lowest rates in all of Latin America, and not currently achieved by many countries); the educational system consisted of about 20,000 teachers, all with Normal School or College degrees since 1940; exporting textbooks worth 10 million dollars annually. As is easy to see, no one plow any desert or anything.

Today, after having left behind, apparently, the idealism that they were all college -more to compete with someone that country’s real needs-(a lot of college graduates universities — more to compete with someone than to meet the real needs of the country — (a great number of graduates don’t practice the professions for which they were educated, we find architects performing as artisans, industrial engineers as tour guides or waiters, nuclear engineers driving taxis, etc.).

Higher or university education should focus on developing good professionals, capable of restoring a nation in poverty through their well-paid jobs, who don’t have to migrate to another country in order to practice their professions. In short, so much political and ideological education for over fifty years, has not been very useful, as students, intelligently, have worn the masks of the widespread double standards, so as to seem to be one thing during their studies and another after graduation. It is a reality that only those who don’t want see it, can’t see.