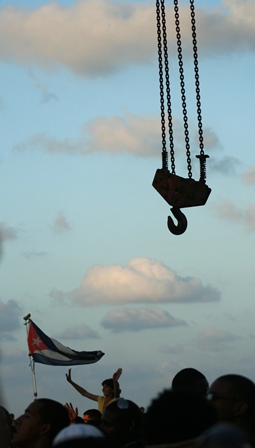 One might think, after the papal homily at the Plaza, that the Catholic Church wants to participate in the change in Cuba in the longer term. But what it demonstrates — with the calmness of two thousand and twelve years in which it has sinned in being in a great hurry and distrusting the power and point of the spiritual inheritance  which it amasses to rejuvenate people — is a protocol of indirect belligerency.

Despite being one of the most powerful institutions in the world, it seems to still be at the mercy of the first effrontery that long ago led it to expel many from its convents. It could come to be, for Cubans, and it would be beautiful, for the mission of the Church as well, to bring about the change by opening the conscience of the faithful.

After all, Catholicism is not just the inquisitorial police, is also the story of many martyrs in the original sense of the word, who were persecuted for proclaiming faith in Jesus Christ. But the church today could also limit itself to preserving the rites. Few Catholics that I know feel called to exercise from a Christian perspective, a judgment on the present Cuban situation. Temples are the repository of our personal problems, not to truly look at others.

So the Gospel dream awakes the consciousness of human rights and the desire to reclaim them does not occur in most of the faithful in any denomination in Cuba. And not because it is not contained in one or the other, to respect all beliefs, but because some Pauline quotes us, nor was I always calm.

However, I have never felt myself closer to the Christian doctrine then when I decided to come out of the closet. This shit of gray Cuba and firing cannons, speaking empty words, would last many decades as we do not persevere in our right to liberty and to proclaim the truth.

This Spring has been gray, cold and repulsive, metallic with the guns of war sounding to receive the Roman Pontiff who, however, found a “warm” welcome. The Ladies in White have been deleted from the papal celebrations, without their telephones so we cannot hear from them. We do not know if they have been detained in some dungeon so as not to disturb the idiot ecstasy of Peter’s Successor. Only God could be like us.

I still have no information that any abuse has exceeded that of the Black Spring of 2003. There was a Black Spring that people did not have sufficient notice of, and so could not be aware, because we live like ants, looking for good,”escaping” although no anonymous Cuban has declared he has escaped.

We are still here, bearing without scandal all the vagaries of power against us, the citizens. There are too many accomplices to judge them all some day, it will have to be like Havel in Czechoslovakia. Journalists have behaved, lauding the “just” government that dictates to them an editorial policy, censorship, without any real information.

In this Papal Spring many of my friends are detained, I have hope that they will be progressively be released during these first hours. I learned from Ada who have already freed Eugenio Leal, of the blog Veritas, and in this way I also learned that he had been taken prisoner.

Agustin remains in detention, I know nothing of Ismael or Ciro. No one answers the phone in some of the houses I have called and it can only be they they have cut the lines. Because I doubt they have gone out today. If they are there, they cannot answer, and if they are not there, where are they now?!

Ada says that the whole area of Capdevilla, from Boyeros Avenue leading to the airport is full of police, and that her husband had to run and escaped before they could take his camera, because he had come to take pictures. Of course the rest of the population, or most, is not scandalized. It wasn’t like this with John Paul II, the Pope who wrote about the Spring.

This Ratzinger is capable of being satisfied,he doesn’t think that any Cuban, nor some foreigner, on this day in Cuba, can undermine His Holiness of Rome: the only one who puts his blessed ass on a chair to pontificate. What do they call the toilet of Pope Ratzinger, perhaps the “scatological pontificate”? I’m wounded, only by the Catholic Church. I love Christ more than my life. I believe in God. We do not assume a cross, but to conquer in Christ.

But meanwhile, I have to also denounce what communism has done to these people. Ihave said the Communism is the pajamas of the leaders, the more comfortable they are to rest in peace, without fear of uprisings, confusing public opinion which, for a long time, thought that to be leftist was to be progressive and humanly advanced. Lies, I suffer them.

I called someone, an idiot, someone I know but who is not among those I can call friends. When I told him what was happening, he said, “Yes, they’re ’keeping’ the people until the Pope leaves.” He insulted me, he apologized for his vocabulary.

But that is exactly what our enemies believe, this part of their mind because it is part of the vocabulary they’ve inculcated in the whole world: they can imprison people for hours, days, years, decades, because they don’t see them as subject to rights, they see them like clothes, rocks, animals. A zoo, with guards.
Another neighbor told me, and I took it as a fetid culture for studying the causes of this Cuban abomination, “You have to convince the people, and if you can’t convince them you have to defeat them,” the word he used was “vanquishing.” That means the use of force and violence without regard to the contrary.

How could anyone in the world believe  the spokesperson of the Cuban government, call it the Foreign Minister or anyone else, when he says that “Cuba condemns the war,” if the ideology planted in Cubans on the Island of one of war, of imposition, of no respect for the rights of the other person?

The police are uneducated because they have been thoroughly deculturized. An ideology that speaks of the “New Man” and ignores universal values. It is capable of any violence if it come to be powerful at a world level.

The value of a human person, image and likeness of God in Christ, in Cuba is considered a “thinking species,” those who it express it this way are lost. Because their own language, and wanting to form an army of beasts, will condemn them some day.

Christ is Judge, the Lamb of God.