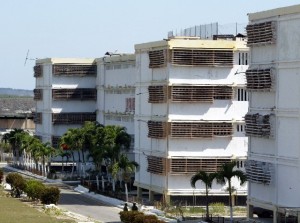 The American citizen Chris Walter Johnson, a prisoner in Combinado del Este since August 2009, went from uncertainty and depression to euphoria when on Wednesday, 2 February, two guards helped him get into his wheelchair in the ambulance which drove him to the Havana airport, from which he departed to Los Angeles, California, on the day on which the sentence of 18 years imprisonment was supposed to have been made final by a Provincial Tribunal of the capital.

During his oral presentation, which occurred on 27 December 2010, the defense lawyer presented the summary of the clinical history of Chris Johnson, in which he demonstrated that his state of health isn’t compatible with the regime of penitentiary life. On passing sentence in the middle of January, the judges expressly rejected the document, tacitly accepted two weeks later.

The case had a happy ending, but it could have been disastrous for this 58-year-old sailor, who in a decade traveled 50 times to the island, where he had lovers and a daughter before they detected a kilogram of marijuana in a jelly container, for which he was accused of drug trafficking and attempted bribery. He was locked up in the La Condesa prison for foreigners, from which he had been transferred to the prison’s hospital located in Combinado del Este, but for him the bars and the stress accelerated the ailments of an old maritime accident.

Chris Walter Johnson survived more than a year in a wheelchair in Cuba’s largest prison. He needed an operation on a tumor in his spinal cord which put his life in danger. He also suffers from vertebral compression which obstructs oxygen access to his brain. The standing position made him lose consciousness.

Before Chris’s surprise release from prison, the defense lawyer commented to this reporter that he was happy because “it is an extensive but just decision, although we still don’t know if it was because of furlough, by expulsion from national territory dictated by the Minister of Justice, or a special exit permit from the Minister of the Interior, in accordance with to Special Instruction number 9 from the Government Council of the Supreme Tribunal.”

According to the jurist, “In normal conditions, there could have been an extradition, but no such bilateral treaty exists between Cuba and the United States.”

Johnson’s case illustrates other processes discussed by neither the Cuban nor foreign press. Dozens of tourists are paying behind bars for the habits, customs, and activities that conflict with our rigid, slow, and severe penal system.