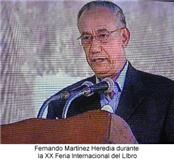 In the late 1960s I was on the point of changing my career. Extremely excited by what I’d read in the magazine Critical Thinking, I decided to enroll in the Department of Philosophy. But it was a closed shop and I lacked the qualifications. At that time, Fernando Martínez Heredia was the director of that publication, which was finally closed by Raul Castro in 1971.

Thanks to Fernando I learned there was another way on interpreting Marxism, especially from reading Louis Althusser, that brilliant intellectual who “spoke the language of Marx.” On more than one occasion I wondered what his response to Heredia would be on this or that issue, attributing to him, although without any proof for it, a clear anti-dogmatic tendency and some level of personal courage.

This year I’ve become reacquainted with that court philosopher because he is one of the personalities to whom the XX Havana Book Fair is dedicated. I have him on my TV screen giving a speech at the opening session. At one point he says we are, “A people formed during a heroic act, a people who were living with next to nothing, neither employment, nor public health, nor schools, caught between disbelief and apathy…” and I have to ask myself if I was wrong about Fernando, or if perhaps they gave him a lobotomy.

How can a respected intellectual say that there had been a time in Cuban history when there was no work, no public health, no schools? Had he studied abroad? Or did he only learn to read after the Revolution? A statement like that is something not even Randy Alonso could accept, though as director of the Roundtable program he can be expected to come up with all kinds of nonsense. In fact I’ve even lost my desire to visit the Fair.