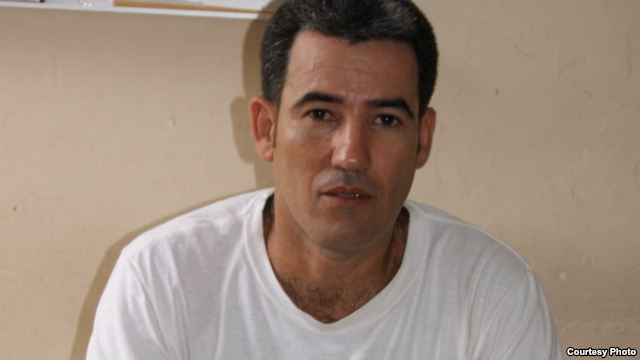 Independent journalist Calixto Ramón Martínez Arias continues to be jailed in the Santiago de las Vegas police station, and “will be charged with the crime of aggravated contempt for authority,” according to precinct captain Marisela.

On September 19 the captain referred to Hablemos Press Information Center correspondent as having “disrespected Fidel and Raúl Castro and said that the investigator in charge of the case was sub-Lieutenant Rosmerty.”

For 72 hours after the detention, the police kept the details about Martínez Arias’ arrest secret, after he was detained last Sunday night for investigating an event that took place at the International Airport José Martí. Presumably, the event holds the Cuban government responsible for the deterioration of medicines sent by the World Health Organization (WHO).

According to Roberto de Jesús Guerra Pérez, director of Hablemos Press, he and a group of friends showed up in the police station located at Avenidad Independencia and Calzada de Managua in the town of Santiago de las Vegas.

“The officer on duty at the station communicated to us that Calixto had been transferred to another station. We received no further details,” said Roberto. Nevertheless, according to the law, the police have the obligation to allow communication with the detainee.

For this reason, this Wednesday at one o’clock in the afternoon, at the Santiago de las Vegas police station, Roberto de Jesús and independent lawyer Veizant Boloy, demanded that information about Martínez Arias’ legal situation be given. “Last Monday they lied to us, because Calixto was in the station,” stated Roberto de Jesús.

“We asked the captain, Marisela, if we could see him and give him some toiletries, when a State Security agent named Yuri showed up, accompanied by another police officer. They asked us for identification and sent us to the cell,” explained Boloy after they were released that same day around midnight.

“As we walked down into the dungeons we yelled Calixto’s name, who was surprised to hear us and replied to us. We saw the wounds on his face, caused by the beatings inflicted by the police,” said both Guerra and Boloy.

“Our detention and everything that happened at the station took place under Major Arnaldo Espinoza’s watch, Unit Chief at the Santiago de las Vegas police station. His badge number was 00182. Although the ones that really give the orders are the State Security agents,” added Boloy.

According to information given this past Friday by Roberto de Jesús Guerra, Calixto R. Martínez was given medical attention at the National Hospital for a swollen left eye, and was transferred to a prison located to the West of the capital and known as “El Vivac.”

The Prosecution has not given notification as to when Calixto will be able to hire one of the lawyers from the National Organization of Lawyers’ Practice, who are the only ones authorized by the law to defend Cuban citizens in a Cuban court of law.

Calixto Ramón has been jailed on several occasions for his journalistic work, and has also been deported at least 12 times for remaining in Havana with an identity card that has an address from Camagey.

This time, the correspondent of Hablemos Press, who assured us his mission was “to break the wall of silence imposed by the island’s government and to denounce human rights violations,” could serve a sentence of 1 to 3 years in prison.