The objective of the Poultry Company of the Cuban province of Granma, for the year 2014, is to increase egg production. It exceeded last year’s in the company’s balance sheet, last January 29th.

Juan Carlos Reyes, sub-director of Combined National Poultry (CAN), highlighted the support and dedication of the local Granma workers and reported that although there are material limitations, the level of resources on some lines will be higher this year which has just begun. Nevertheless this month, January, they didn’t produce more than 700,000 eggs owing to defaults in contracts and deliveries of feed.

The poultry breeders, notwithstanding their difficulties, are seeking increased efficiency, and doing the impossible in order that everyone can have eggs. 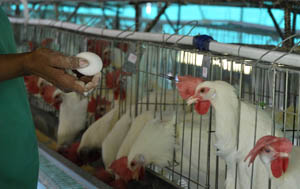