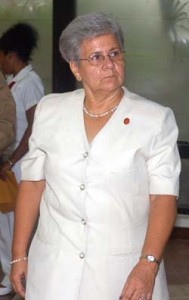 Eliot Ness and his group in Chicago in the 30’s were called ’The Untouchables’. They fought head on rampant corruption in the Windy City, and through legal chicanery of tax evasion led gangster Al Capone to prison.

That group of Chicago has a female version in Cuba. Her name is Gladys Maria Bejerano Portela. She is the Minister of Audit and Control. That is, the Comptroller’s of the Republic. She has BA in Social Sciences, is vice president of the State Council and deputy for the province of Guantanamo. Her second in command also wears skirts: Alina Vicente Gainza.

According to informed sources, Gladys Bejerano is now enemy number one of the huge apparatus of bureaucracy and corruption from one end of the island to the other.

They say that the corrupt tremble when they see Bejerano’s inspectors appear. No wonder. Corruption has become a way of life in Cuba, and is rooted in all levels of island endeavors.

The most visible are the different ’clans’ created in sectors such as food, tourism, telecommunications, aeronautics, free zones and department stores and refrigerators where they blatantly run rackets with the State’s resources..

These ’cartels’, almost mafia, have become rich selling wholesale chicken, oil, tomato paste, textiles and electronics, pirated internet accounts, prepaid cell phone cards, cement and construction materials. It is composed of party cadres at the mid-level who hide their silver under their mattresses.

They are double-faced and full of double talk. They update the union murals praising Fidel and Raul, propaganda for the release of the five spies imprisoned in the U.S. And, at the request of the State Security, attend acts of repudiation and beatings against the Ladies in White.

The unseen face of corruption points to national leaders and the advisors of some ministers, who make straw figures and count on the cash balances from the dirty money generated by their business.

It is a chain. On weekends, each manager of a hotel, restaurant, cafe or club delivers an envelope to a confidence guy of the municipal director.

The figures vary according to the importance of place and the amount of money coming in. Then, the director passes on the take to some ’godfathers’ within the provincial party, the ministry of domestic trade or tourism.

With the creation of the office of Comptroller the gears of corruption have been threatened. When in August 2009 the Gazette published Law 107, creating the Comptroller General of the Republic of Cuba, administrators and directors did not take it seriously.

They thought it was one of the cyclical battles against corruption being undertaken on the island. Later forgotten about. An anonymous tipster said he was convinced that leaders of the status quo derived large profits with money and influence peddling generated by corruption. Not a few believe that financial fraud, misuse and monumental theft are designed in ministerial cabinets.

But Gladys Bejerano, 64, had other plans. She is a woman who has the absolute confidence of General Raul Castro. She received direct orders from him to play hard ball against bureaucracy and corruption. That did not stop with names or threats.

In just over a year, audits and controls have been key in sending more than 60 officers of major companies operating in foreign currencies to prison, including the Food Minister, Alejandro Roca.

In the investigations that are currently taking place in Havana and the rest of the country, to detect irregularities in ETECSA, the telecommunications company, Bejerano’s team is playing an essential role in the discovery of the whole network of corruption and bribery.

They never notify in advance when they will do an audit. Managers and leaders of higher echelons hate it. From below they call them ’incorruptible’. And “The Untouchables.”

In Raul Castro’s crusade against illegalities and corruption ithe final chapter of the investigations against senior officials ETECSA is still to come. It is the drama of the summer in Cuba because of the powerful heads that could roll. It will be a litmus test for Gladys and her protector, Castro II.

Ramiro Valdes, a former Minister of Information and Communications, now a superminister, is an “historic” leader of the revolution and one of Fidel Castro’s men. If she sees him involved in shady deals, can the Cuban ’Iron Lady’ see the game to the end?

In Chicago in the 30’s, Eliot Ness eventually destroyed Al Capone. But Ramiro Valdes in Cuba is more powerful than the American gangster. Much more.