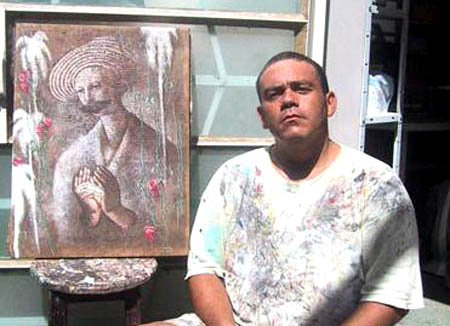 The first time I was close to Agustin Bejarano it was in 2004, during a couple of hours of the night literary circle,and I had never seen his work. His name began to sound familiar, as a well-treated artist, but his surprising and meteoric rise that would begin a little latter was still unknown, for this man considered one of the untouchables of Cuban painting today.

My first impression of Bejarano, during that meeting at the home of the writer Eduardo Heras León, was inconsequential: jovial, shrewd, a good conversationalist, these are roughly the adjectives that would have described him at the time.

The second meeting with him, just a year ago in my native Bayamo, would have a slight difference: Agustín Bejarano came to town as the guest of honor of an event about art, preceded by his status, and then I unreservedly included myself among those who regarded him as a marvel of contemporary art from Cuba.

His works, bold and refreshing in the pictorial language of the island, seemed to me to have an irresistible authenticity.

So now that this Camagueyan appears in the Miami news without his admirable aura, his status shredded, wearing the orange uniform and a face with the typical expression of the common prisoner, I put the two concepts together and tell myself, “The Agustín Bejarano whose works fascinated from the very first time, and the one who is now behind bars in the Pre Trial Detention Center, facing charges of sexual abuse of a minor, are the same person.”

A sad way to make himself known to the American public: today, even those who knew nothing of his contributions in prints, or his highly prized paintings in the international market, know him from the news of the Cuban pedophile who came, invited by the Pan American Art Projects, and molested a five-year-old boy–Good God–the son of his friends in their own house.

Formally, this is the accusation against Agustín Bejarano. Carl Zogby, a spokesman for police in Hialeah and in charge of the arrest, said in essence: “The defendant confessed to the crime, is very sorry and claims he felt an inexplicable weakness that led him to commit this act.”

According to the official version, the boy told his parents five days after the alleged incident: the distinguished visitor and friend of the couple had placed his erect penis between his little hands, and kissed him on the mouth when the adults were not present.

Terrible. Maddening. I think in the Cuban cultural universe, a story as amazing as this one had never featured, starring one of those who, when they appeared in news, it was always to inspire admiration. Never disdain.

It’s worthwhile to steal away a hurried analysis of the incident, on some points in particular.

After a telephone conversation I had yesterday with another talented artist on the island, I knew one of the theories circulating about this case in Cuba: Could it be a Machiavellian trick, or a manipulated exaggeration to discredit Bejarano, to end his career, or to get a lot of money out of him?

Some, pragmatic, merchants of the art world point in Miami. Others, detectives, look toward bad politicians.

I personally do not see the point of either motive, but still, I confess: I would love to hear that it is a mistake, a deplorable stunt, and if that were the case, I would defend the artist with the same vehemence with which I will applaud his hard sentence if he is indeed guilty.

Nor do I understand how they could make money, the supposed art ruffians, with Bejarano behind bars for 20 years or for life (it could be either if he is convicted), nor do I understand what political interest could raise a man who, unlike actors or musicians, has no media presence outside his guild, and does not represent any discord or discomfort for the establishment of this country.

Worse, the argument that would weigh against him, most of all, is the powerful story of a boy of five. Why? Well because psychologists and those in charge of questioning the little boy say, without exception, that is almost impossible to invent a story like this at that age, when even the concept of lying is not part of consciousness. In conclusion, the experts say, five-year-old children never lie. Much less with such complexity.

The second vital aspect in this dramatic case, is to clear the political implications that may arise from it, and that could affect the damaged bilateral relations in the field of cultural exchange.

If we take into account the existing malaise in the Cuban exile community, which claims, with justice, that this is euphemistic exchange is only in one direction, and if we take into account also the incidents of Silvio Rodríguez advocating in New York for the Five Heroes or Spies (the reader can click on the nickname he prefers: interactive reading); the disastrous concert of “Gente de Zona” in Las Vegas, with brawl included; and now with a Cuban artist accused of committing such a heinous crime, I suspect it could revive the discontent among some sectors, and could become dangerous with little reason.

As this case has only just started, and how much–I am sure–we’ll find out in the coming days as to the veracity of these disturbing allegations, to establish an accurate view about the morals of this painter, yesterday glory, today villain, is unwise and unnecessary.

But about something I have no doubt: from now on we will attend the Olympic ascent of an already memorable career, if Agustín Bejarano emerges unscathed from this unforgettable case with the reputation that would earn him a name in the media; or, terrible reality: we will know the tragic end of a Cuban artist who lost in the United States not only his vast career, but his status as human being deserving of the most elementary respect.