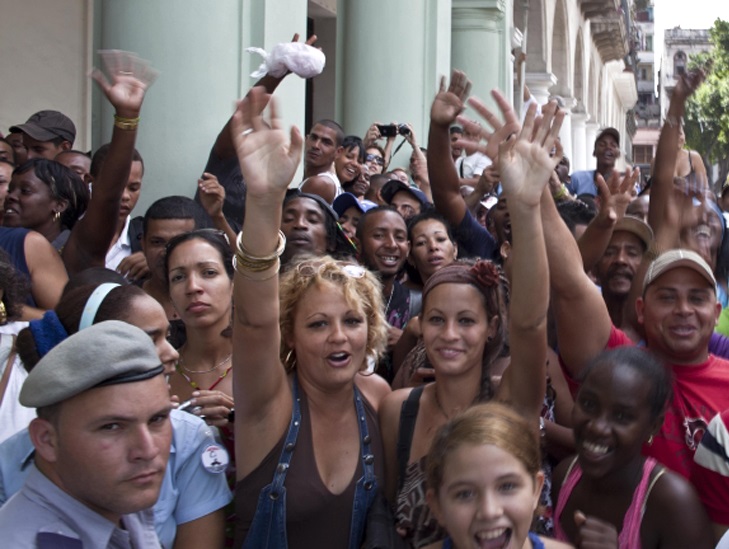 Cubanet, Miriam Leiva, HAVANA, 18 December 2014 — President Barack Obama announced a new direction in US policy toward Cuba, on December 17. The Cuban population has expressed great joy at the news, both within the archipelago and abroad. It is a brave and historic decision, because it provides the opportunity to finally eradicate the existing environment of confrontation of almost 55 years and initiate fruitful relations to benefit of the Cuban people. The measures taken by the US president have been greeted with enthusiasm and hope by millions, although other Cubans remain cautious, because they commonly face harsh living conditions and repression.

President Raul Castro announced he was open to extensive negotiations with the United States, on all subjects, in a televised appearance coincident with that of President Barack Obama. The reasons to promote the rapprochement with Washington may be very extensive, including the deepening of the Cuban economic crisis, the need for foreign investment for recapitalization and development, social discontent over the socio-economic deprivation, loss of public confidence, and the need to improve Cuban’s international image. To achieve freedom and democracy, civil society will have to traverse the long and difficult path imposed by a totalitarian regime that seeks to prolong itself through its heirs.

The exchange of Alan Gross, imprisoned in Cuba in 2009, for 3 prisoners sentenced as spies in the United States, was a necessary condition for the US government to be able to initiate the process of normalization of relations and to achieve results with new measures directed toward the Cuban people. In addition, the island government agreed to release an American citizen after some 20 years, and 53 other political prisoners. The tradition of the American government is to not abandon any of its citizens, and to provide for their exchange or rescue with military action.

The efforts of lawmakers from both parties, the diplomacy, and members from all sectors of American society have had an important role in these developments. Pope Francis has once again demonstrated his wisdom, aided by nuncios accredited in Havana, and the Cuban Catholic Church, headed by Cardinal Ortega and the Conference of Cuban Catholic Bishops who have continued to accompany the nation and the people with their traditional patriotic and religious vocation.

The measures announced include initiation of talks to restore diplomatic relations; regulatory reform to empower the Cuban people with more efficiency; favoring the expansion of general permits for travel to Cuba and increases in the amount of remittances; expanded authorizations for commercial sales and exports of certain goods and services from the US; authorization for persons living in the United States to import additional goods to Cuba; facilitating financial transactions between the two countries; initiating new efforts to increase access to communications in Cuba and people’s ability to communicate freely; updating the application of sanctions on Cuba in third countries; establishment of negotiations with the governments of Cuba and Mexico to discuss the unresolved maritime boundary in the Gulf of Mexico; beginning of the process of reviewing Cuba’s as a state sponsor of terrorism; discussion of the participation of Cuba in the Summit of the Americas in April 2015; a firm commitment to democracy, human rights and civil society, including strong support for improving human rights conditions and democratic reforms in Cuba (a summary of an extensive Fact Sheet issued by the Office of the White House Press Secretary).