At the request of Angel Santiesteban I am publishing here the letter sent by the well-known poet and writer Francis Sanchez, in which he attached an article he wrote.

I don’t know if you can open your mail, if you can read this message. I just want to say: Be strong “boy,” we love you.

In an independent publication that I do, I am going to publish this text about you, I wrote it a little while ago but didn’t publish it, I am sending it to you, you can do what you want with it.

I hope everything gets better for you. You are free because you are “the captain of your own soul” (Invictus). 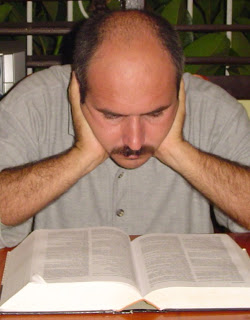 SMOKE SIGNAL FOR THE RELEASE OF ÁNGEL SANTIESTEBAN

Today it’s Ángel Santiesteban. The magnificent author of books that have won prizes in the main Cuban literary contests, our friend, has apparently dissolved in the rare environment of this country, ceasing to have a voice, or to be publicly mentioned.

He became “crazy” when he started to think out loud. He had created a web site, the blog The Children Nobody Wanted, with which he was “marked” because now everyone knew what he thought, how he dissented, and what limits someone intelligent, young, was willing to cross, away from the dead point that signifies the inertia of the mass. But could he really? At what price?

He was sentenced to years in prison for “violence” against his ex-wife, ultimately a minor offense for the Cuban state, compared to opposing government control. Then they took him down to the dungeon they take the criminal with no respect for his ideas.

No one, of course–neither the most influential official, nor the most sublime writer–should be above the law or feel free to disrespect the integrity of others. However, we know too little about the outburst with which he was charged and the judicial process. Painful ignorance, although illuminated, because it now consists of a valuable clue — for whomever doesn’t know — about the lack of guarantees in the environment of these events. Do the minimal indispensable conditions exist so that, in Havana, Angel will receive a fair trial?

Recently we have seen the national press go on and on about this type of demand relative to the sentences against the five compatriots in Miami, accused of espionage. Here, in Cuba, we don’t even have the ability to inform the friends of Santiesteban, his colleagues, his readers, to know the arguments of the contending parties, to get an opinion.

Before they forbid the circulation of this words, his books were in high demand and we saw him constantly on TV and in the press to satisfy the interest in his literature.

Angelito — as he is known, though he has never disguised his image as someone of flesh and blood, someone no less human than the characters in his stories — before he began to say that he thought in his blog, was the main guest t book fairs in every province, attracted readers, officials, journalists …

However, today he is another “mysteriously disappeared” intellectual. I know, for example, that they recently suspended the presentation of an anthology, “I’ve Seen the Trains Pass, Union Edition,” because it includes one of his stories.

However, unlike so many protagonists of Cuban culture who have been suddenly “made invisible,” because a microphone captured them at home saying something compromising, or because they went into exile — where they continue to go on with their lives and their work — Angel has ended up in prison.

An indication of something worse, perhaps the saddest thing, is what happens to us when we stay “outside” in our own country, that is, on the other side of these bars. Be cannot receive information, or express our concerns or contribute our opinions.

The right to express an opinion, which is a power, has been confiscated from us and, indeed, this illustration the “alteration of order” possible in such conditions, when a writer dares to leave the mold of fiction. Living in impotence, in a forced ignorance about our social reality, about the fate that has overtaken the country and that is reserved for us and the people we love, including those applauded by the institutions of the State itself–as was the author of “The Children Nobody Wanted,” winner of the Alejo Carpentier prize, and “Blessed are Those Who Mourn,” winner of the Casa de las Americas Prize–is not the punishment imposed on all the inhabitants of the island like culprits in a maximum security prison? Do we all behave badly? As sad or even sadder, this time, has been proving what we human beings confined in social enclosure are capable of, to get a respite.

One of those days I saw a letter that circulated on the mail network with the title “8th of March: Everyone against violence,” written and signed by the lofty members of the Writers and Artists Union of Cuba (UNEAC), calling on colleagues from all corners of the country to support the conviction the writer had just received.

They invited the list to grow even more as a sign of rejecting gender violence. So apparently enough supposedly agree on the legitimacy of the right to join the stoning of another rebel intellectual who had already passed through the official process of “disappearance.”

Once I reviewed the string of signatures that signed on to the call, I asked myself: could each and every one of them feel knowledgeable enough to take sides, and so quickly, in a litigation about which nothing had been divulged in Cuba and where the accused maintained his innocence?

I will avoid slander, avoid assuming that those who gave their signatures and became a part of a heavy chain, are neither writers nor artists, after that have done something I believe is incompatible with the decency of the intelligentsia: climbing on the apparatus of power to add pounds to crush an individual. In this case, it is a writer, possibly another in the list of victims of the totalitarian system.

But I would ask them, those who stamped their initials: do you really believe that “up there” needs your little bit of “moral weight” to crush people? Sure, I understand them, and I offer my condolences for their situation, because soon they’ll be facing a higher court, in the exam that is periodically performed on the flock to separate their names in other ways: the black lists and the lists of the privileged. I will say that the saddest, the most painful, is that this type of human and the collective class capable of generating Cuban culture in the difficult situation being experienced.

My current statement about the “reappearance”, for the release of Angel Santiesteban, can’t go beyond, not venturing further from the same request for freedom of expression, freedom of the press and freedom of association, among the other basic human rights, not for him, but paradoxically for all those we have left “outside,” or rather, on the other side of these bars. 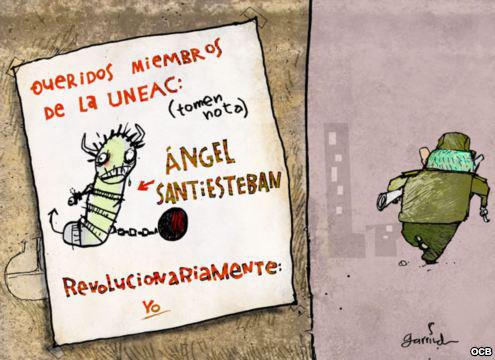