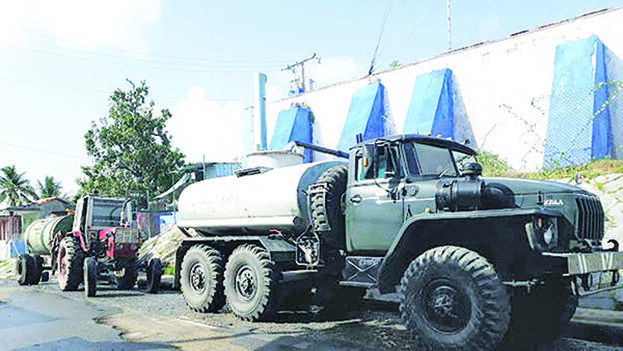 14ymedio, Madrid, 2 February 2022 — The lack of water supply in some areas of Pinar del Río has reached a point of insanity. For up to 30 days at a time, 3,000 people in several municipalities in the province’s capital are without any water supply, according to Antonio Rodríguez Rodríguez, president of the National Institute of Hydraulic Resources (INRH) who visited the area on Tuesday.

The official went to Pinar del Río to announce that the arrival of nine pumping teams, of the 51 teams on the Island, is expected to improve the situation of the territory, which is today the most damaged on the island, although Villa Clara did not lag far behind

Three of these teams will go to the main pipelines, one to the community of Briones Montoto, another to Los Palacios and a fourth will work on re-pumping in the city of Pinar del Río, although no date was given for when families affected by this situation might hope for improvements.

The identified culprits are fundamentally two, the US “blockade” and the “disorderly growth” of the population. “If it were orderly, it would have its infrastructure and we would not have that problem. The analysis points to around 26 settlements that have grown and that today do not receive the service,” said Deputy Prime Minister Inés María Chapman.

To alleviate the problem, a comprehensive intervention is necessary that includes the pipeline, the distribution network, the storage network and the interior networks that supply the homes.

According to Rodríguez Rodríguez, the Council of Ministers approved giving priority to Pinar del Río and Villa Clara in a loan granted by the Ministry of Foreign Trade and Foreign Investment. “This will be a source of financing that will allow us to not only to carry out the investment works, but also to sustain them and guarantee the training of the personnel,” who will operate them in the long term

This last issue seems to be of vital importance since the official explained that the pumping equipment that will arrive soon will be assembled and checked by the Water and Sanitation company to ensure its proper functioning since “not a few of those previously supplied have burned out,” according to the provincial newspaper Guerrillero, which did not add who was responsible for these events.

According to the authorities, 1 contract with the University of Pinar del Río will guarantee the improvement of the management processes of the Aqueduct Company and its municipal division.

Serious supply problems force more than 4,000 people to be supplied with tanker trucks, known as pipas, of which more than 3,000 have “cycles of more than one month,” which is how the Cuban bureaucracy describes the frequency with which, in this precarious way, a service as basic as water is delivered.

Less serious, by comparison, seems to be the situation in Mantua, where it is planned to build a pipeline which will and receive water from tanker trucks roughly very seven days. People living in Herradura and Entronque de Herradura experience the same ’drought’ conditions and interventions are also planned there.

Guerrillero notes that the province constructed a 30-inch pipeline last year, replacing one section with another to eliminate deliveries en route and the worst sections of the 36-inch conductor were eliminated to be able to carry water to the city. Judging by the results, it does not seem that the plan is going very well

In 2021, works of more than 4.5 kilometers were carried out on the main pipeline, in addition to 20 kilometers of networks and pipes that have improved supply, according to the official press, “although difficulties still prevail,” they admit. For this year, 418 interventions are planned, of which 148 will be in the provincial capital “as soon as possible.”

On the Island there are problems in more than 240 of the pumping stations, as evidenced by the usual lack of supply in towns ranging from the capital to small rural towns where water is conspicuous by its absence.

However, Cuba has been exporting engineers to South Africa for almost 10 years to help the Department of Water and Sanitation fight that country’s infrastructure problems and share their knowledge.

In turn, the Cuban state-owned company for the maintenance and repair of hydraulic works and the Spanish electrical supply company ERKA recently joined forces in order to offer “comprehensive services to water and sanitation systems in Cuba.” The agreement also provides for diagnosis, construction, repair, rehabilitation, assembly, start-up and after-sales services, as well as a guarantee on networks and facilities on the Island.