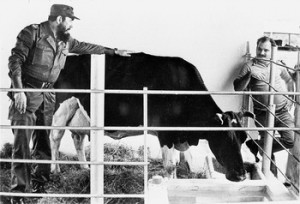 It causes chills to know that the historic leader of the Cuban revolution did research on different crops to improve nutrition for the Cuban people.

I don’t want to be a harbinger of ill omen. But reviewing Castro’s “experiments” in 52 years of olive-green government, he didn’t come up with any that were successful.

Let’s review the record. Let’s leave aside his social, military or political essays, which are being published in a collection. Let’s forget that insanity of designing in vitro a communist society having the village of San Julián, Pinar del Río, as the test case.

Let’s avoid his militant manias of directing, from a distance of 10,000 kilometers, the theater of operations of the civil war in Angola. From a mansion in Nuevo Vedado, sitting in a black leather easy chair, pointer in hand, facing a massive full-scale model full of toy soldiers and tin cannons. And like a common grocer, ordering the distribution of candy, ice cream and chocolates to the troops.

Let’s overlook his promises that in 2000 we would have an industry on the level of the U.S. Still, listen to the excited masses, gullible and faithful, cheering wildly at one of the many public plazas built for him to give his speeches. Yes, that is a personal achievement of Castro: As of today, Cuba is one of the countries on the planet with the most plazas per square kilometer for political acts.

The little father of the country also embarked us on fierce media campaigns against the foreign debt in Latin America, back in the 80’s. He said that for such a financial hardship he would send the bill to the continent.

And that from the third world we would land in the fourth. He was wrong. Right now, Latin America is growing, and Brazil and Argentina – who would have thought, comandante? – are studying the option of loaning money to rescue the faltering European economies.

It’s Cuba that isn’t taking off. His list of broken promises is long. One night of revolutionary partying at the Karl Marx theater, after putting a finger in his mouth, looking at the smooth ceiling and doing the math, Castro promised that every year 100,000 homes would be built.

A troop of intellectuals, engineers and judo coaches, who never in their lives had picked up a trowel, were converted by decree into construction workers in order to build their own homes. And those of others.

Let’s jump over the shoddy workmanship and frightening design of those buildings. There was no question of style. It was sheer necessity. In the workplace, the Union and the Party gave the apartments to the most loyal, in meetings comparable to a brawl among lions in the African jungle.

You might think that we are very demanding with this old man of 85 years. In the end, anyone can make mistakes.

But the ex-president has put his foot in it many times. In all fields. The most painful has been in regard to food. A sleepless night, back in 1964, brought from France the agronomist André Voisin, to implement on the island his new concepts about agriculture and the crossbreeding of cattle.

Later Castro said that the”Frog” knew less than he. And he sent him back home. As always, he laid the ground rules. He ordered the construction of air-conditioned dairies in the Valley of Picadura, on the outskirts of Havana, and said we would be eating so much beef that we would suffer from gout.

And that we would have malanga, fruits, vegetables … And microjet bananas. He published cookbooks with Ecuadorian recipes, so that Cuban housewives could take out part of a banana and prepare fufú (mashed), ladybugs (banana chips) and tostones.

With the river of surplus milk, after exporting a few thousand tons, we would produce Camembert and Gruyere cheeses of such high-quality that France and Switzerland would pale with envy.

As for sugar, once our national pride, he was its gravedigger. The beginning of the end of a secular tradition was initiated by the comandante in 1969-70, with his harvest of 10 million tons and the introduction of new and “more resistant varieties of cane.”

So now, in the 21st century, we occasionally import sugar from abroad. And finally to put the lid on the jar, we don’t even take advantage of the many qualities of sugar cane and its derivatives. The bagasse furniture sold in hard currency is imported from Brazil.

Coffee was another one of his whims. Thousands of habaneros planted Chilean coffee along and across the capital. Together with fresh air, we would be washed with the smell of strong, sweet coffee, said the optimistic local leaders.

Yes, today the average Cuban has coffee for breakfast. But mixed with peas. The depressed state coffers can’t afford the luxury of spending 40 million dollars to import a better bean.

Therefore, it applied the fiscal scissors. For the common people, of course. Officials in their offices have thermoses with coffee of superior quality. Those who can buy it in the “shoppings” (hard-currency stores) also drink good coffee.

When in 1990 that dark period began, which still floats in the air of the republic, known as the “Special Period in Time of Peace,” – in fact a war without the thunder of cannons – the drawer of the bearded one’s “food solutions” was opened.

Those were hard years. The Cubans were going hungry and fell into bed with optic neuritis. The old drank tea with leaves of orange or grapefruit. Which made those with low blood pressure, like my grandmother, dizzy, so they had to lie down.

Through the ration book, they began to sell food that they knew bordered on rubbish, baptized with original names. Soy hash. Meat paste. Fricandel. Root pasta. Hollow hotdogs. Cerelac. The invasion of the palate continued with soy and chocolate yogurt.

When on the night of July 31, 2006, Fidel Castro’s personal secretary, Carlos Valenciaga (where are you, Charlie?), looking mournful, announced that his jefe was retiring, many thought that the experiments had come to their end.

But no. The incombustible leader reappeared with his gibberish and forecasts. He prophesied that the world would end in a world war. He couldn’t wait to enter the fray. Which he liked. The issue of food.

And now he’s telling us that he’s seriously investigating a solution? To nourish the “sacrificed population that is suffering the rigors of the blockade as never before.” Which are double. The gringo and the regime.

People have received his” research” with concern. If in 52 years his attempts weren’t successful, would they be now? Let’s pray that he will be a passive grandfather. That he will play with his grandchildren and take a nap. That he will write his memoirs and surf the Internet.

But please, stop the experiments. Give it up, comandante.