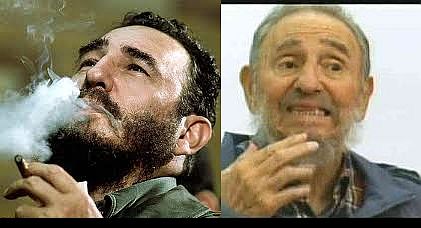 Fidel Castro’s return to public life after a four-year absence provokes conflicting emotions here. His reappearance surprised a people awaiting, with growing despair, the reforms announced by his brother Raúl. While some weave fantasies around his return, others are anxious about what will happen next.

The return of a famous figure is a familiar theme in life as in fiction — think Don Quixote, Casanova or Juan Domingo Perón. But another familiar theme is disappointment — of those who find that the person who returns is no longer the person who left, or at least not as we remember him. There is often a sense of despair surrounding those who insist on coming back. Fidel Castro is no exception to this flaw inherent in remakes.

The man who appeared on the anniversary of “Revolution Day” last week bore no resemblance to the sturdy soldier who handed over his office to his brother in July 2006. The stuttering old man with quivering hands was a shadow of the Greek-profiled military leader who, while a million voices chanted his name in the plaza, pardoned lives, announced executions, proclaimed laws that no one had been consulted on and declared the right of revolutionaries to make revolution. Although he has once again donned his olive-green military shirt, little is left of the man who used to dominate television programming for endless hours, keeping people in suspense from the other side of the screen.

The great orator of times long past now meets with an audience of young people in a tiny theater and reads them a summary of his latest reflections, already published in the press. Instead of arousing the fear that makes even the bravest tremble, he calls forth, at best, a tender compassion. After a young reporter calmly asked a question, she followed up with her greatest wish: “May I give you a kiss?” Where is the abyss that for so many years not even the most courageous dared to jump?
ad_icon

A significant sign that Fidel Castro’s return to the microphones has not being going over well is that even his brother refused to echo, in his most recent speech to parliament, the former leader’s gloomy prognostication of a nuclear armageddon that will start when the United States launches a military attack against North Korea or Iran. Many analysts have pointed out that the man who was known as the Maximum Leader is hardly qualified to assess the innumerable problems in his own country, yet he turns his gaze to the mote in another’s eye. This pattern is familiar, with his discussions of the world’s environmental problems, the exhaustion of capitalism as a system and, most recently, predictions of nuclear war. Others see a veiled discontent in his apparent indifference toward events in Cuba. Yet this thinking forgets the maxim: Even if he doesn’t censure, if Caesar does not applaud, things go badly. It is unthinkable that Fidel Castro is unaware of the appetite for change that is devouring the Cuban political class; it would be naive to believe that he approves.

For years, so many lives and livelihoods have hung on the gestures of his hands, the way he raises his eyebrows or the twitch of his ears. Fidel watchers now see him as unpredictable, and many fear that the worst may happen if it occurs to him to rail against the reformers in front of the television cameras.

Perhaps this is why the impatient breed of new wolves do not want to stoke the anger of the old commander, who is about to turn 84. Some who intended to introduce more radical changes are now crouching in their spheres of power, waiting for his next relapse.

Meanwhile, those who are worried about the survival of “the process” are alarmed by the danger his obvious decline poses to the myth of the Cuban revolution personified, for 50 years, in this one man. Why doesn’t he stay quietly at home and let us work, some think, though they dare not even whisper it.

We had already started to remember him as something from the past, which was a noble way to forget him. Many were disposed to forgive his mistakes and failures. They had put him on some gray pedestal of the history of the 20th century, capturing his face at its best moment, along with the illustrious dead. But his sudden reappearance upended those efforts. He has come forward again to shamelessly display his infirmities and announce the end of the world, as if to convince us that life after him would be lacking in purpose.

In recent weeks, he who was once called The One, the Horse or simply He, has been presented to us stripped of his captivating charisma. Although he is once again in the news, it has been confirmed: Fidel Castro, fortunately, will never return.