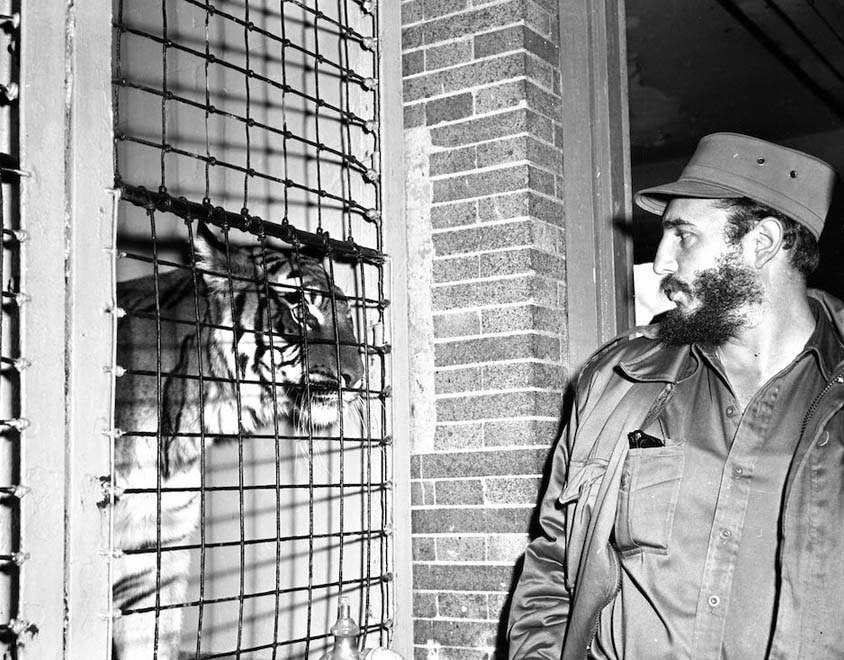 We Cubans are going to miss Fidel a lot.

Fidel was a spontaneous, almost infantile, assassin with an irresistible charisma that eroticized even his bodyguards. Meanwhile, he could kill just out of a curiosity to see his victims’ last expression of panic or rage. Like someone who naively opens up a lizard from Birán* or the virginal vagina of an adulterous woman from Havana.

With Fidel deceased–in one of those fecal spectacles of running around between stretchers and Mercedes Benzes–today, we as a people have ended up alone with a one-eyed psychopath* and the pathetic pedophile, Eusebio Leal.

Fidel was always covered in mud. He got in and out of military jeeps and helicopters whose blades decapitated the rest of the leaders of the Revolution. He cut sugar cane with gusto. He drank water from wooden cups containing the saliva of peasants. He shot three-point baskets. And thirteen-point baskets. He expelled priests and sent gays to concentration camps. Or both.

He caught marlins like Hemingway and he was an ace at cross-breeding cattle. He smoked and smoked and dodged cancer cells. He planted everything and had a talent for reaping nothing; that cycle of sterile stubbornness toward the Cuban people was a symptom of closeness. Fidel was a loser that never lost, a Cuban from the ’hood.

Fidel was me. A guy that diverted hurricanes and brought AIDS to Cuba from the African bush, in the white blood cells of his little hetero, ebony-colored soldiers. He cloned interferon and solidified the amorphous formula of Spirulina. He deported half the country and put it to work for him in malls from Miami to Melbourne. And that’s not counting that he sent the first black man into orbit. Fidel, my friends, was fearless.

Now in 2015, Cuba is on its way to democracy. The government in Havana is saturated in rich white people who have made pacts with the rich whites of the Cuban-American ex-exile community. The commanders of the Revolution are being cremated on a regular basis and the holocaust archives have not only disappeared, they’ve been quickly rewritten. The future belongs entirely to that past that never made its debut.

The only thing we can hope for from the grim, one-eyed Alejandro Castro Espín** and his Zionist zetas is massacre, but those thousands of dead matter less than Eusebio Leal’s robes. The grand nineteenth-century gentleman, the despicable thief who made off with the property of Dulce María Loynaz, Lage’s pal and other so-called reformers who ended up in pajamas*** and powerless even to give interviews, the historian who was punished for being corrupt and for making an embassy joke about taking Old Havana to the “Granma Yacht mausoleum,” in short, the parish priest who shoves his pedigreed dollars up the asses of Lolitas… he judges the Cuban people in public–a people whose mass stampede abroad has been our only revenge against the tyrant–barely equal to a speck of dirt on his Lord Spengler rain coat.

As a result, the neo-marketization between Brickell’s*** totalitarian tycoons and the corporate mafia bosses of Siboney****, must imply recycling the best minds of my generation in the laundry room of a high security prison. Nothing that happens in Cuba is believable. The first democrats to reach democracy on the Island will simply be the fast food items that Fidelism currently teaches at its world summits.

As a Cuban, I miss Fidel a lot. I miss his cadavers, who are my last contemporaries. The maximum leader of the Third World calls us “lumpen,” “scum,” “worms.” Yet he never stopped covering himself in our excrement, the excrement of a prostituted nation during half a millenium of despotism without government and without God.

It also makes me sad that, in his death, Fidel is going to really miss us, his Cubans.

Translator’s notes:
*Birán is the place in eastern Cuba where the Castro brothers were born and raised.
**Refers to Raúl Castro’s son, Alejandro Castro Espín, who lost an eye during military training in Algeria and is currently a colonel in Cuba’s interior ministry.
*** In Cuba when someone in power is ousted (but not imprisoned) their “retirement” is colloquially referred to as “the pajama plan.”
****Brickell is a street in Miami where the superrich live, and Siboney is a neighborhood in Havana where the elites live and ordinary Cubans are not allowed.