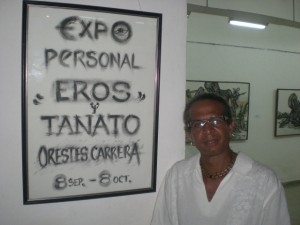 Wednesday, September 8, the painter Orestes Carreras Alarcón opened an exposition of his paintings, Eros and Thanatos, at the Fernando Boada gallery in the municipality Cotorro. There are 12 mixed media paintings worked with charcoal, graphite, acrylic and blended with textures. In them, the painter subordinates color to figuration, focusing on the relationship between eroticism, bullfighting and death. Eroticism as a necessity, death as a part of life and its connections with vigor and energy, symbolized by the human figure.

In this installment, the pursuit of freedom of expression goes through syncretism, the deformation of the faces and the mixtures, a recurring theme in the artist’s work, true to his own vision, oblivious to the market and the colors he uses, knowing that art fairs and local customs often limit the creative pulse. 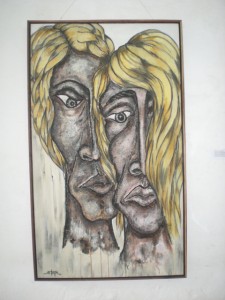 The work of Orestes Carreras is essentially expressionistic and surreal, highlighting evocative provocative textures, and using universal codes that reveal his creative maturity.

The size of these paintings (almost all of 1.50 by 1.10 meters) forces the viewer to watch from afar due to the texture required to disclose the figurative representation of various steps of the canvas. The natural and human figures that decorate each painting embody a visual approach is neither symmetrical nor one of cartoonish figuration.

We infer, then, that there are beautiful, but not artistic, things, and that symmetry is the main element of beauty, palpable in these paintings that challenge taboos from the aggressiveness of the images to the simplicity of color, with predominantly gray, and combinations of sepia, yellow and blue. 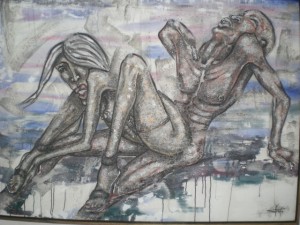 The peculiar spiritual sensitivity of Orestes does not have many precursors in Cuban art, except in the syncretic vision of teachers such as Lam or Mendive, those who differ in the color palette and converge in the figurative overflow. The stylized Greco faces, the recreations of the Guayasamín Aboriginal environment and works of German Otto Dick, appear to be sources for the island artist.

We find ourselves facing strong proposals, disturbing, aggressive and sometimes shocking, although there are distinctions in the lines and intentions contained in each piece, with the interesting and grotesque form of beauty, conceived from stories intertwined with the mythology of Eros, the virility, the mixture, and death.

The paintings Alligator Love, Autumn Gift, Heresies and Narcissus At The Spring, certify the pictorial transgression. Heresies complicates the mixed expression of longing and ancient energies, love between life and death, represented by naked women on bulls, whose large noses hang like condoms, a kind of bridge and sexual limit.

The Narcissus of Orestes is not handsome, lost in looking at his face in the spring; it expresses sexual ecstasy with the fountain as the source, accented by silver graphite, charcoal and textures.

Sex gallops in the images of The Flight, Eruption, Desires and At The Theater. In The Flight a man and a woman are drawn without wings in white and gray. Eruption is an illustrative and subtle work that limits the figure in its space. The same cleanness is observed in Desires which offers two faces of surreal beauty that infer the unisex. At The Theater fantasizes about the promiscuity of four couples making love in the corner of a bed.