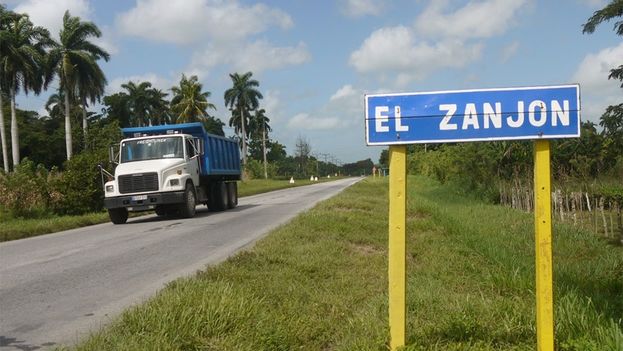 14ymedio, Reinaldo Escobar, El Zanjón, 25 August 2014 – No one remembers when the old Spanish barracks were demolished and or the decades passed since the allegorical tally of what happened there. Although the official history vilifies this place, a sign on the central highway tells us we are nearing El Zanjón, whose name also appears on the ID cards of the three hundred people who live in the small village.

On 10 February 1878, the seven agreements of the Pact of Zanjón were signed there, putting an end of the Ten Years War. Thus, the two fundamental objectives that had caused the war were frustrated: Cuban independence and the abolition of slavery. General Arsenio Martinez Campos would be the big winner in an accord that many Cubans considered a shameful page in the national history.

The vast majority of the Liberation Army fighters accepted the pact, with the exception of Antonio Maceo, who a month later starred in the Baraguá Protest. That attempt to keep the struggle alive only lasted until mid-May of the same year, and shortly after Maceo, the Bronze Titan, abandoned the Island for Jamaica.

A century later, Fidel Castro would proclaim that “Cuba will be an eternal Baraguá.” On taking up this historic event, he would define the intransigence and obstinacy of the political system that has been installed on the Island for half a century. Any dialog with an ideological opponent has been perceived, for decades, as an imitation of the Pact of Zanjón, while intolerance is guided by Maceo’s classic phrase, “We don’t understand each other.”

Perhaps this is why the small rural school in El Zanjón is now called Baraguá Protest School, and the history books define the signing of that Pact as an act of treason. Even the use of the name “Zanjoneros” for those who, according to official views, tried to capitulate after the disaster or Real Socialism in Eastern Europe. Thus, in a small town 375 miles from Havana, people no longer have a native identity they can wear with pride.

But today, the few cows chew their cud and its distaste in the Zanjón lands is not altered, nor the roar of the trucks on the highway. “Here, nothing happens,” a resident tells me, and adds, “So I’m leaving and I’ll never come back.” Leave Zanjón, I ask him. “No, I’m leaving the country, because no one can resist this.”

And there goes another who capitulates, as the official discourse would say, although others prefer to think that they will go into exile to return one day… like Maceo.