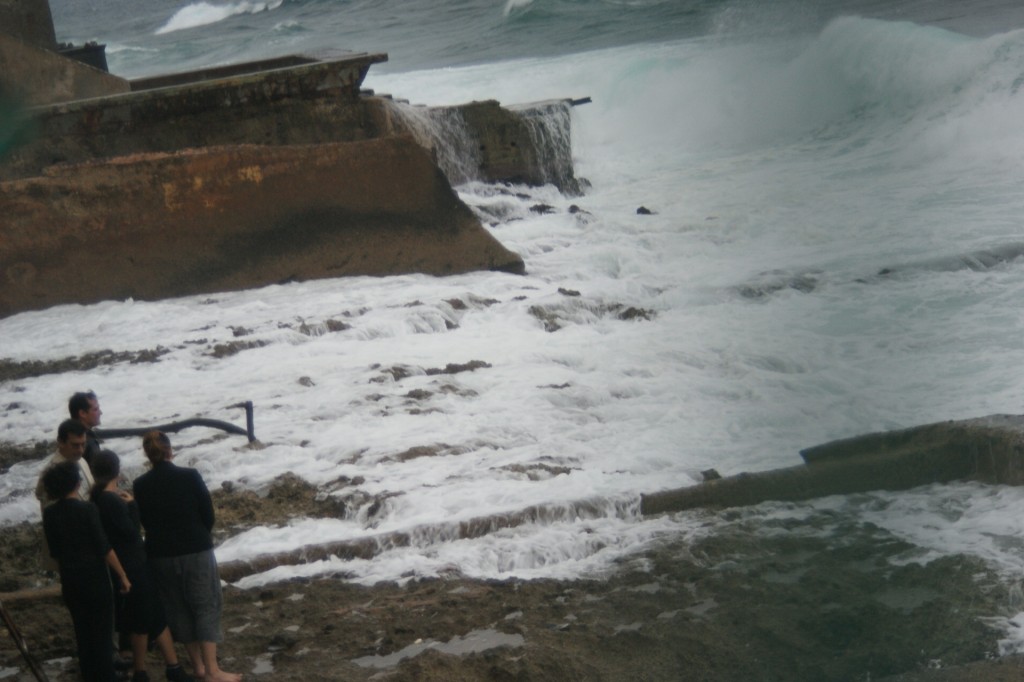 It is January 28, Monday, I get a call from Yoani earlier than usual, it was 7:55 am when she told me we should go by Rodiles’ house; she always thanks me as if my work were a favor and not an obligation, I was ready and found myself behind the wheel, at 8:07 I was already at the side of the container only existing in our imagination, a few minutes later el Indio and La Gacela got out, we went to pick up Regina Coyula and then Claudio in el Vedado, taking 23rd Avenue to 12th, which goes to the tunnel before coming out on 10th to First Street, then continuing on 60th to Rodiles’ house. A close look around suggests to me that the dictatorship’s henchmen aren’t around, or are hiding like rats in the sewers. The writer Angel Santiesteban opens the door to us and we exchange hugs and enter the house. I was immediately surprised by seeing the casket before me, I didn’t expect it.

El Indio had told me it would be a family ceremony and I supposed they would bury him or cremate him quickly, but now, there with the front turned toward the sea was the coffin. I greeted the man who was sitting in the chair at the entrance and tried to remember his face which escaped me, perhaps I didn’t know him, my mind struggled among the gaps, a useless effort. I hugged Guillermo Farina and Jose Daniel as is greeting my brothers many years since we’d seen each other, feeling an immense joy at every meeting with these men with the bravery of many men.

El Indio, La Gacela, Claudio and Regina had already gone in and expressed their condolences; I came upon Rodiles and hugged him with a lump in my throat and just said I’m here with you, these moments move me but not for the dead who are already at read, but for the living, we who are left in frank defiance with the pain, I would hope that some day we would all exist in the world promised by God, free from suffering and evil, sheltered by love. Borges was sitting on the right, I also give him a hug, then I went and shook hands with a graying gentleman accompanied by a lady, both unknown to me.

I went to where the widow was on the left hand side and near the head of her late husband and gave her a kiss on the cheek, touching her gently, and continuing my tour greeted Lia and her husband and another couple I didn’t know, and then came to the old man Alfredo listening to the story of his birthday some days back where the henchman Camilo abused and taunted him over his condition as an old man, his anti-Castro position — these types have to be charged and taken to court, not for vengeance but for justice — and so I turned and approached the coffin.

Behind the glass is the old man’s face, but for the marked paleness of his cheeks one might think he is only asleep napping, an aura of peace surrounding him, I looked at him trying to guess him last thought, then try to remember our first meeting, where I do not know because I got the impression that he was weighing life and not the years, my mania of uncovering supposed pains that perhaps are my own and no one else’s, later on other occasions in the Estado de SATS debates already pressured by the political police who stationed themselves on the corners around the house to intimidate some and arrest others.

It was here, in his house, where for the first time I could say publicly something he thought many years ago about this clumsy, mediocre and incompetent government, the words came out of me with such emotion I was trembling, changing the constitution, practically forced to say to a socialist panelist that socialism doesn’t work. If El Indio and La Gcela baptized me as a man of the time in the house of the older Rodiles, they would allow me to wear the crown.

When it came to these meetings and I sought him and greeted him with all the respect I would put into words until they got used to me, an incomprehensible affection for my part, I guess he was too overwhelmed to notice. Later came the fateful day after Paya’s doubtful accident when, under a strong police operation the funeral motorcade left the chapel and the mob fell on his son, Rodiles, along with Fariñas and other opponents, and police and security guards took them to a cell at the fourth season.

Then when we demanded the freedom of our friends I saw him there with his wife leaning against a wall with a serious face and looking at the floor, the group became large and an officer with a star on his lapel asked us leave the place. Disobeying the orders we stayed in front of the police station, the old man stood there and I saw him addressing the officer gesticulating mumbling words that I couldn’t hear but I had the certainty that they were threatening him in some way, for a moment I thought the old man cold drop dead, he had been there since late at night, between evasions and deceptions about the release of his son, and he was not allowed to see him and give him the food he had brought, we were there they promised to release him the next day at 9:00.

The agents brought an ambulance fearing a fatal event. But old man stood up to the onslaught. When I looked at him arguing with the officer my mania to discover past and present, mixed with this infernal imposition of times out of time made me think of the ironies of fate. What impression did the old man have, someone who had fought to establish this dictatorship believing in justice and now inveighing against the injustice against his son.

The last time we saw him wasn’t that, the difficult time of the last arrest of his son, beaten and jailed for several days with the threat of prosecution for assault and contempt, something incredible for a country that respects rights and freedoms prosecuting a man for defending himself against aggression, at last after many days of negotiations with lawyers along with publicity and protests set him free, but this must have stolen from the old man half the days he had left, the day of the release I saw him with very little desire to talk, he didn’t tell me but I would speculate that he wanted a break from everything.

Behind the glass was the still and pale face, oblivious to our presence always giving the impression of a nap. I said goodbye, although from this side of the glass where there seemed to be life, and we said goodbye to everyone leaving the body with the head towards the sea, waiting for his sister to arrive for the crematorium to interrupt the natural process of the body and after the ceremony we solemnly threw the ashes into the blue ocean. It has been three days, it is the evening of January 31, some gray winter clouds are carried by the wind from the north where the exiled or escaped Cubans seek freedom, as if freedom were some specific site or the privilege of selected nations with ancient predestination.

For him it must have been unbearable, and he wasn’t strong, he wasn’t overcome but he was weakened, however the next day when we met at his house to share the joy of Antonio’s release I saw him animated without a premonition that another onslaught by the regime awaited him that would be worse. Seeing him with his hair carefully combed as if it were a party, he looked like my grandfather.

As I entered the house accompanied by El Indio and Dagoberto the religious ceremony paving the way to eternity had begun, we stood at the end while Catholic priest Castor prayed all the sweet gospel prayers, asking the blessing of the great Creator of all things and the outpouring of the Holy Spirit.

Solemnity, silence and the notes of an organ with a song that rises to heaven, a Bible that opens alternating with the voice of the messenger of the Lord, and peace that spreads through the room hosting the remains of the deceased, now introduced in a small ceramic device. I am amazed that so large a body now fits in a container so small, it is death that reduces everything to nothing or into a hope for those who believe in Christ and the resurrection.

Besides those who were with the coffin with the body rigid in the peace of those who sleep, was now added other persons unknown to me. I try to guess which is the sister who was expected from the other side of the sea, life and death, torment and agony of many Cubans seeking freedom, but that functions in the face of the inability to conquer it with dignity. I gather she is the stout and ruddy woman who stands by the widow and the orphan and at some point will crumble and cry sadly.

The homily of bread and wine, blood and flesh, finished, Rodiles’ son between words remembering a hand lost to time tenderly stroking his head and others that stuck in his throat in a pain that is more than pain, thanked those present and moved by the goodness of his father.

We went out to the terrace overlooking the ocean, the north wind blows harder, the waves rise up and lick the reefs leaving a white foam on the rocks. They put a ladder down the wall to where the water roars and groans, in their hands of the one they loved and into the ocean they poured the dust that a few days ago was the body of Manolo.

A giant wave approaches and foam covers the spot where the dust spilled. Everything ends, behind the north wind is blowing hard, rough seas, a memory falling into oblivion and silence death unknown always ready for a day before or after. You come with nothing and you leave with nothing, live according to your strength and not your efforts.

In the condolence book I wrote: One of the events that have marked my earthly existence in recent times has been the opening of the doors of this house, goodbye friend Rodiles.

Dust thou art and to dust thou will return and the spirit will be renewed. 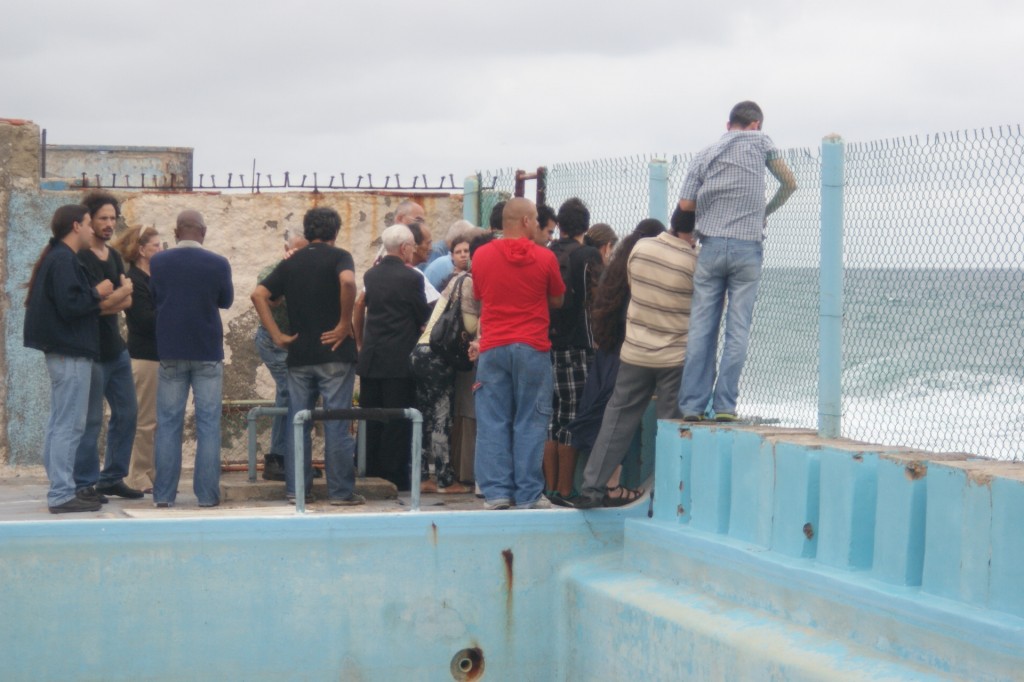 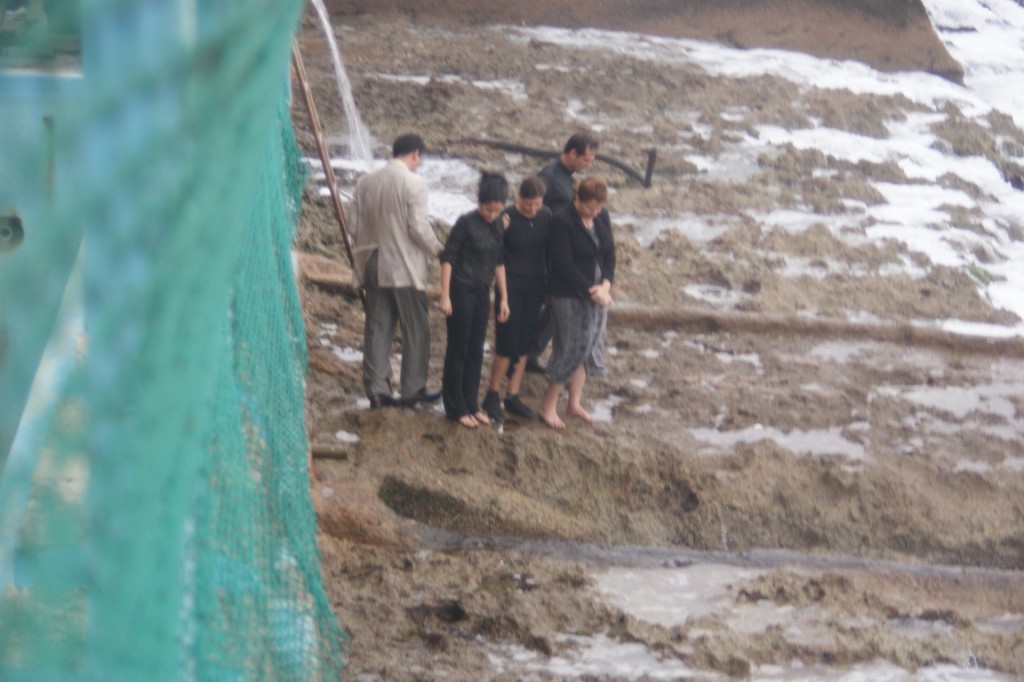 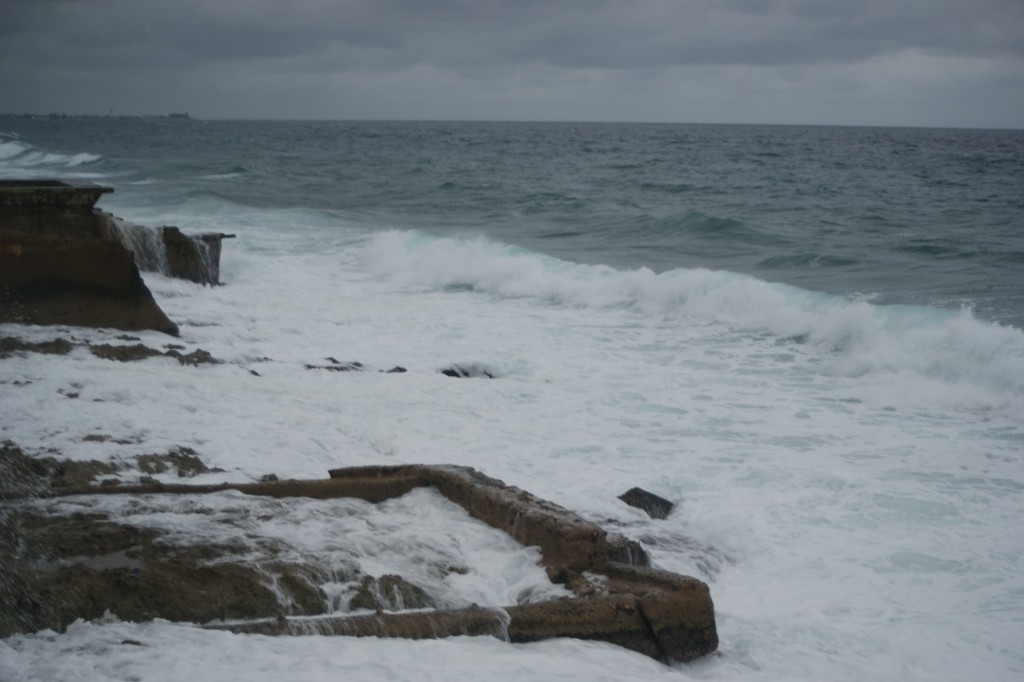