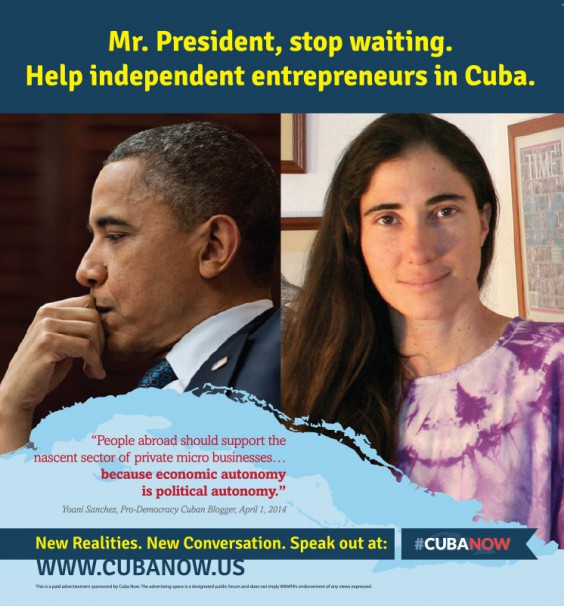 Snoozing on the Washington, D.C. subway early one morning with my dreams still flitting between Franz Kafka and Stephen King after a evening filled with nightmares of State Security bursting into the apartment I’m staying in—which is near to where they shot The Exorcist—I finally wake up when I see the CubaNow banners through the train’s windows.

CubaNow is a media campaign run by a group of young Cuban-Americans who prefer not to disclose the source of their funding. Their secrecy echoes the recent scandal of USAID’s not “undercover” but “discrete” operations with the ZunZuneo project, an SMS network designed to work in Cuba. Their secrecy is also a reminder of the opacity with which the Havana government operates, in its domestic matters that ought to be in public view, as well as its smuggling of weapons on civilian ships, and its spies in the United States disguised as scholars, entrepreneurs, and even Pentagon analysts.

It’s curious how similar the political propaganda is starting to look in the capital cities of those two once irreconcilable enemies.

Perhaps CubaNow is a part of the pressures that President Obama needs to feel before he takes each controversial step, even though his administration has already shown enough signs of goodwill towards Castro’s Cuba, as these banners implicitly recognize. For their part, the leaders over in the Plaza de la Revolución have always rejected any rapprochement that does not fit with their monolithic model for continued power.

“It’s time to try something new,” suggest the CubaNow banners. Also, “It’s time to bring the discussion of politics between the United States and Cuba into the 21st century.” Then they add a quote from the blogger and famous Cuban dissident Yoani Sánchez, plus a photo that I took of her.

As far as I know, we were never asked whether we wanted to lend our support to this campaign. As compensation, CubaNow ought to do a better job of launching itself in today’s Cuba, where the people need something more than economic concessions, in a denaturalized nation that has lived for 55 years under a single press, a single party, and a single person.