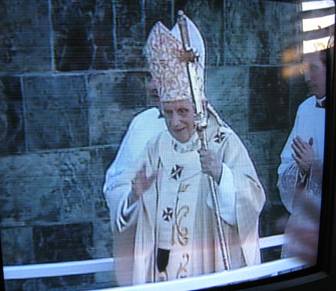 Taking into account the time elapsed between the first and the second papal visit (fourteen years and two months), for most of my generation, this was the last chance to see a pope at home. The Pope came, bowed, prayed, celebrated two Masses, talked, met and prayed to God for all Cubans. In the media the presence of believers and unbelievers was constantly highlighted, but the correct thing to say would have been Catholics or non-Catholics, because here everyone is a believer, including those who don’t publicly say so, it’s just that some believe in God or gods and others in the Devil.

Although expecting results from such a short visit (three days) is absurd, (remember that God needed at least seven), it should be noted that in Santiago de Cuba neither party said anything new that has not been repeated to the point of boredom for decades.

The words of welcome: propaganda, repetitive and gray, seemed more like a summary of some known reflections. The appreciation for the visitor: poetic, generic and only good wishes. Moreover, the intervention of the Archbishop of the Diocese, was well below that of his predecessor, Pedro Meurice Estiu, in 1998 before Pope John Paul II.

In the Mass there was much Gospel and little connection with reality, despite the flags on high and the chanting religious. It is possible that the papal intention here was only to honor the Virgin of Charity of Cobre, to celebrate the four hundredth anniversary of her apparition to Cubans in the waters of the Bay of Nipe, and to give her the Golden Rose. As a reason, it is valid.

In Havana, where they expected something more important and solid, apart from the reading of an opportune verse from the Gospel (here was in connection with reality), everything focused on a call to search for the truth that will set us free, something many of us have been doing for a while.

At the official reception some truths, half truths and too many lies were said, for general consumption and the media, rather ceremonial and of no great importance.

A friend quite profane, a boxing fan, told me that the meeting between Church and State had been more of feints and calculated moves inside the ring, they fight, pretty much disappointing the audience, who expected a little more action. It seemed that the combat was agreed to in advance around the table, since no one scored any hits. Sometimes, in the results from the conference tables, no one wins but both lose.

I think my friend is wrong and that, in addition to what was published, there were agreements and commitments made under the table, as has happened throughout history, among the various representatives of divine power and earthly power.

I hope that the Church has not only raised its interests as an institution, but has also concerned itself with the interests of Cubans as a nation. If this is the case it will come to light over time and through events, touching on the Government, the Church, and principally on Cubans, so that it doesn’t all just end up in words and good intentions, which we’re a little tired of.

In short, the most important is the citizenry, leaving behind the fanaticism of so many years, introducing into their life plans the absent and so necessary civic point of view. It imposes on us to act as responsible citizens, although the task is not easy, as it needs conviction and practice.

The double standard (which is nothing more than lack of standards, or morals), the false unanimity, the acceptance of what should be repudiated, the intolerance, material and moral corruption, lack of ethical principles and other evils, fully developed and installed in our country, must be fought against and eradicated.

Citizen will for real economic, political and social changes also needs to materialize. On then will these three days have some reason to be remembered.