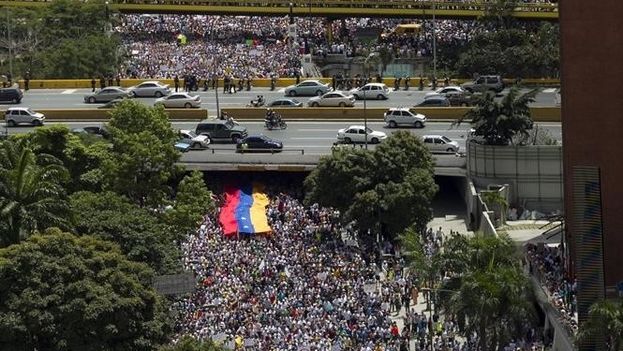 14ymedio, Carlos Alberto Montaner, 3 September 2016 — It may have been the largest march in Venezuela’s history. Did it serve for anything? We’ll get to that. I begin my analysis with a view of the government.

Maduro and the Cuban DGI agents, who actually rule the country, faced a dilemma: in the face of a giant demonstration, should they remove the fragile democratic mask they still wear sporadically, declare martial law, suspend constitutional guarantees and dissolve the National Assembly on the pretext they were impeding a coup planned by Washington’s perfidy, or should they obstruct the demonstrators, arrest the leaders and cause the demonstration to abort by disrupting the march at various spots in its course?

They opted for the second. They believed that they could do it. That’s what the authorities do in Cuba. They arrest, disperse, infiltrate, harass the opponents, pit them one against another with a thousand intrigues and prevent them from seizing the streets. The streets belong to Fidel. That’s the task of the vast and secret body of Cuba’s counterintelligence (55,000 to 60,000 people), the regular police (80,000), plus the rough-and-tumble mob of the Communist Party, while the three regular armies remain on standby in case they need to join combat. Total: 350,000 rabid dogs, not counting the Communist Party, to bring to bay 11 million terrified lambs.

They were wrong. The social control is not the same. In Cuba, the opposition was liquidated by gunfire in the first five years of the dictatorship. There was resistance, but the authorities killed some 7,000 people and jailed more than 100,000. Two decades later, in the late 1970s, when the cage had been hermetically shut, they began to release them. The Castros have held Cuban society in their fist for half a century now. The Soviet KGB and the East German Stasi taught them how to lock the padlock. Today, Raúl has perfected his repressive strategy. It was the one the Chavists futilely tried to use in Venezuela.

The Venezuelan opposition holds on precariously in a virtual zone of the state apparatus. They are mayors, governors or deputies. They hold posts but neither power nor a budget. Chavism has deprived them of resources and authority, although, because Chavism emerged from a democratic setup, it has not been easy for it to build a cage. According to surveys, the Chavists are opposing 80 percent of the population, including a good portion of the D and E sectors — that is, the poorest.

They are an undisguised gang of inept caretakers engaged in larceny. To hide and disguise reality, they bought, confiscated or neutralized the media, except for a couple of heroic newspapers, but the country’s situation is so catastrophic that there’s no human way they can hide the disaster.

Nevertheless, the opposition lacks the muscle needed to force Maduro’s overthrow and the system’s replacement. In general, the oppositionists are peaceful people, trained for 40 years in the sweet exercise of electoral democracy. What could they do? They could march. Bang on pots and pans. Stage peaceful protests. It was the only way to express their opposition in the desperate situation in which they found themselves.

They could fill the public squares in the manner of Gandhi and Martin Luther King, but against an adversary much more unscrupulous than the Anglo-Saxons. They have done so, dozens of times. It was a civilized way to confront totalitarian harassment. The people who kill, the scoundrels, the organized criminals are on the side of Chavism. The armed forces have been taken over by the Cubans and the top leaders are knee-deep in drug trafficking. Letting the army brass dirty their hands was a clever and vile way to tie them. Today they are not united by patriotism but by crime and the fear of the United States’ Drug Enforcement Administration.

In the end, do marches and peaceful protests serve a purpose? Of course they do. The Poles and the Ukrainians demolished their dictatorships marching and shouting slogans. It’s a matter of persistence. He who tires, loses. But there is a very important physiological factor. Participating in a common cause that expresses itself physically — marches, slogans — provokes an exceptional secretion of oxytocin, the hormone of affective linkage produced by the pituitary gland.

That’s the feeling of unity, of bonding, experienced during military marches, sports competitions or the innocent crowd gatherings to listen to popular musicians. That’s the substance that generates “esprit de corps” and permanent loyalties.

The opposition feels fraternally united in these street demonstrations. There’s a burst of trust in the coreligionist and hope in the resurrection of the homeland. That’s all that Venezuelans desperately need to find themselves again in a close and brotherly embrace, because their country in fact is dying. It’s being killed by Chavism.

Note: Translation taken from the English text on the author’s blog.