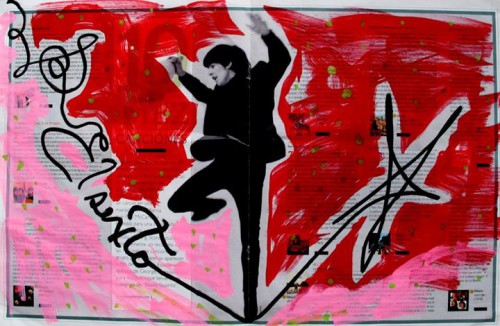 Fog in the mornings, hunger for clarity,
coffee and bread with sour plum jam.
Numbness of soul in placid neighborhoods.
Lives ticking on as if.
Adrienne Rich

B gets up and goes to the shower. Doesn’t close doors or draw curtains. The water runs vaporously, terrifyingly. Bends to open the blinds, the gown open.

—Dis-moi, what is the best?

—The best and the worst, like the Bukowski poem?

—For him, it was the whores, the beer. The worst: The work, the police stations, the terminals.

—Let’s see, the best is to bathe together. And your mother’s rice pudding.

—For me, the best is the light. Your skin, the hues, what I can’t manage to see, what I see too much of. Before and after, the nights at the Cinemateque, with Helmut Kautner. The photography course only-for-aficionados. The watery and hot cappuccinos on the little table beneath the fly trap: Electric trap for bugs, shaking us with each capture, zapping sound included. Without changing places, reading the tired, almost-never-happy faces of the regulars. We’re dying with disgust. More. The couples stopped by the window pane, faces of hand-holders looking for a place, some empty table for two. The estrangement always evoked by the discredit or that childish surprise over everything that at some point was drawn on its own face. Youthful exhibitors of daily stupidity, an expanded emptiness. The crazy guy with his Walkman moving his head, or paying attention in the dark hall to the fleeting hand that slides along the peeled walls of the stairways of Wong Kar-Wai. The waitresses vomiting their boredom into cups. A vomit of sorrow. Of lack of desire and insignificance.

—The alcohol burner and the saltpeter, one guitar-playing friend used to say. Linen clothes, sans doute. To read Bukowski on the toilet. To write dirty poems.

—Bob Dylan in halves: Midnight and half a bottle of whisky for two.

—Tim Burton poems in the Inbox.

—The best, j’insiste, does not include me?

—Let me see… What’s missing are new books, to hibernate under the blankets, the slippers from Quito…

—Count Basie. Your bedroom at three in the afternoon, if it was possible to isolate it from the telephone-streets-buses.

—Black tea, chocolate with cinnamon. Milord at the accordion, Edith on the speakers.

—Now you’re starting to include me.

After and before on the night buses, fuller than the moon and the bellies. The windows open, stained with collective sweat. To linger, watching a fat woman leaning on a grey, dirty wall. A tiny dress the color of skin, the bare skin coming out of the scanty, tight silk. The girl(s) of thirteen, the downy hair behind the neck, the back, the bony shoulders. Straps fallen from a blouse that holds in the hint of all-too noticeable areolas. (Just looking at her you get goose bumps. When a seat is free you take it, and fast, to be direct: Come, don’t you want to sit on me? And she does not hesitate: She leans back, her lightness taking your breath away.) The loose hairs the color of chamomile, or our braided knots. Both of our hairs messing up with the wind on our faces at the speed of the night. Her glances, lost inside the walls that remained, from rubble to rubble, searching for some color that does not exist, for some hue alive in appearance.

READ THE REST OF THE STORY AT SAMPSONIA WAY, HERE.