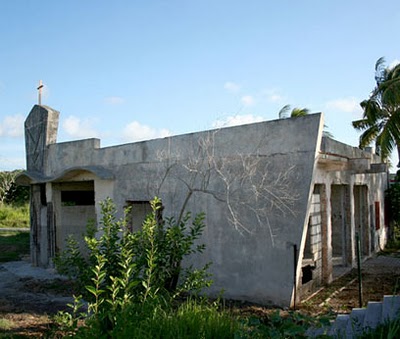 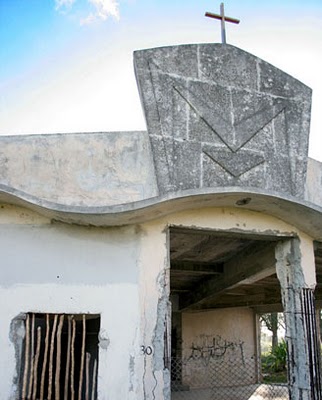 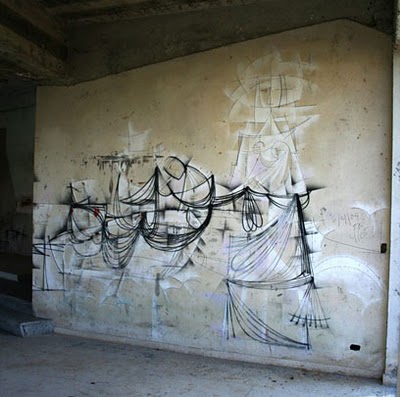 A VISIT TO VISTA MAR

In a cultural magazine of the Catholic Church, I read the tiniest notice, published maybe a couple of months ago. It spoke of a chapel abandoned for many years and of a mural by Dirube that survived in its interior decor.

This past weekend I went up the Santa María del Mar hill, crossed a small, grassy park full of prisoners or crazies with gray uniforms (they performed labor-therapy), and I found the chapel at the end, with its cross raised towards the sky between a telecommunications tower and hard-currency hostel.

The place was beaten by neglect. Palsied fences, planks, bricks. A family inhabited a part of the building, as worse they could. And, in fact, I saw master strokes on the wall, adjacent to what may have been an altar.

It was a virgin. A Picasso virgin, chopped. Ruled, with baby God and little boat of charity with its three rafters included. Thin and thick lines, straight and curved, interwoven, illegible, perhaps a dystrophic flower, a goatish eye, everything holding glimmers of light that may well have been just remains of another painting that eventually faded.

There was an atrocious silence. A resonant vacuum perfect for Dirube, who was deaf from infancy, as well as unknown on the island during his biography. I put my ear to the mural. On the other side one could hear the voice-over bustle of a black Cuban family at the margins of a worldwide 21st century. It smelled of cockroaches and fresh cement.

I felt an inconsolable sadness. Fifty years ago, that division was being built to populate the future. People came and climbed these same hills and put their money to work as a function for creating an architecture of rupture against the patriotic Provincialism of our city concept.

Then they had to immediately flee from the overwhelming justice of the Revolution and they lost forever the epiphanic vision of a cyan sea. The vision that I now had for free, ignorant witness but susceptible to pain.

I took pictures. I breathed. I looked at the concave and claustrophobic line of Playas del Este. It was Saturday afternoon. It seemed to be the last weekend of the nation.

I do not know if, as he died in the nineties, Dirube remembered this mural. I don’t even know if he finished it or if I marveled at a mere sketch at the hands of a magician. Nonetheless, it was a miracle that his work still remained standing, fading without an audience in the face of ministerial indolence, waiting for me to pass serendipitously though here and kneel before the gods gone to pray.

I wanted to be humbled, sink before the splendor in ruins of a dead countryman, ask for forgiveness for so many kicks and coffins in exchange for nothing. I wanted to rebuild the imminent Cuba parting from a Dirube that may well have been a fake or by another painter (I do not trust the cultural magazines of any church).

Cuban culture is somewhat like that smudge, that scribbling of papers and walls, that despotic disregard against those who do not commune with the official faith, that masterpiece for nobody, that apocryphal elite that the people employ as latrine or guest house.

I left. I don’t know if I’ll return to the little chapel. Maybe I should organize a camping trip or hold a mass there in the name of all of you. That super modern temple, that the sloth of the religious institution did not know how to conserve, would be an excellent niche to begin repainting with the colors of change in Cuba.