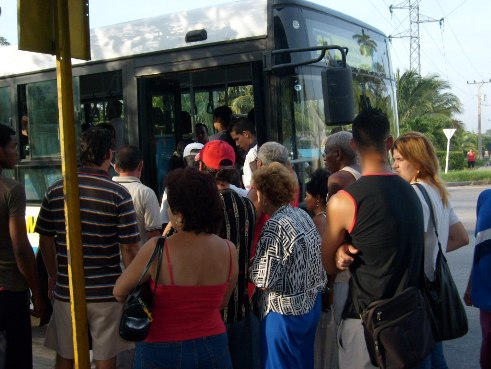 The cause that has kept me from this blog in recent days has been that I am the caretaker of my stepdaughter (younger than me, but not by much) who is recovering from surgery in my house.

But yesterday, having to go our midday, I got on the route 27 and inevitably overheard the dialog of a man and a woman, seated in front of me, as I rode standing up. The famous travel and immigration reform seems to be everywhere, entertaining even people who will never travel, but now they have the illusion that they might. It wasn’t these hopeful comments that impelled me to intervene in a dialog that wasn’t with me. The woman was already getting off when the man said something like, “It’s that sadly we’ve become accustomed to their giving us everything.”

After excusing myself for the interruption, in a voice not very loud but very clear, like that I used in the classroom to get the attention of the students, I expressed to the man my disagreement with his phrase. Said like that, it would seem that we Cubans have enjoyed the ability to decide our own lives, when in reality it is the government that takes the initiative, intervening in the public sphere and interfering in the private.

It was nice because the man tried to make amends with the argument that young people think they deserve everything, and he said it making a gesture towards a teenager with an emo haircut wearing the school uniform of a technical school. The young man, sensing himself alluded to, told him, “No, old man, no, the old lady is right.” Then he looked at me seriously, genuinely interested, “That shit is hot!”

I smiled at him and as my stop was coming, I said goodbye to the gentleman; we exchanged names and shook hands, and he said to the boy, like someone who reveals a key, something he will instantly forget or remember his whole life: “You are a citizen. Exercise this power, we have already left our fate in the hands of others for too long.”