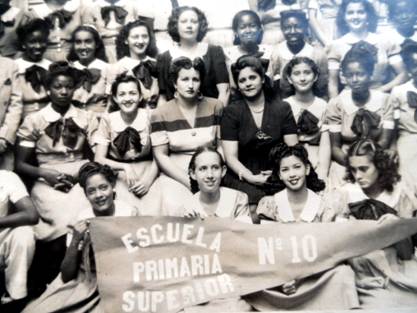 Yesterday, July 28, I read in the Trabajadores [“Workers”] newspaper about the speech given by 6th grade pioneer Wendy Ferrer during the main event of a celebration in Artemisa marking the 61st anniversary of the attacks on the Moncada and Carlos Manuel de Cespedes Barracks. I could not help feeling shame and indignation over the vile manipulation that was so evident in the discourse read by this child.

To my understanding, the words and phrases used were not typical of a school-age child. If they were so, it would only be an even more lamentable proof of the terrible distortion fed to our students, a political manipulation that takes precedence over the true history of our country, and over true education. This is truly unfortunate. I believe that it is a civic duty to clarify for this girl, or actually for her teachers, some of the very sensitive aspects of her speech:

I completed my primary school studies — starting with a marvelous and unforgettable Kindergarten, as we then called what are today known as children’s camps — up to 6th grade in a public school, No. 31 of the Los Pinos suburb. Never, in our humble school, did we go without a school breakfast, as was provided in all public schools of that time. Nor did we ever lack notebooks — which I can’t forget included an imprint on the back of the tables for multiplication, addition, subtraction and division — or pencils, which were provided to all students at the start of — and midway through — each term. At that time, public education accounted for 22.3% of the national budget. There was also a private education sector, with wonderful schools founded and directed by great educators.

The Cuban educational system during the 1950s was made up of 20,000 credentialed teachers and 500,000 students. These figures are documented in the census and statistics of the era and confirmed internationally. Never in the public education sector was there discrimination against a student on the basis of race or religion. If a seeming dearth of black or mixed-race students is evident, this was only due to the fact that in those years, according to the 1953 census (which would be the last until almost 30 years later), 72.8% of the Cuban population was white, 12.4 was black, and 14.5 was mixed-race. At that time our population was six million inhabitants. The private schools were the only ones who had the prerogative to implement selective admissions.

According to my aunt, a great and respected educator and a public school director, the best teachers were to be found in the public schools because the government paid better salaries than the private schools. Also, many of these professors, above all those with specialties in music, art and languages, would also teach classes in private schools. For my lifelong love of music I credit — in addition to my family — those marvelous professors who I had in this subject throughout the course of my primary school studies.

To ignore these facts would be to cast aspersions not only on the Cuban educational system of that time, which was considered one of the best in Ibero-America along with those of Argentina, Uruguay and Mexico, but also on all those great Cuban educators who conferred lustre and prestige on our country. Among  them, to mention only a few, for the list would be interminable, we can name the following:

For all this, I cannot leave unmentioned that, after 1959, government decrees so pressured the teaching profession that private schools closed down and a massive exodus of educators ensued, damaging the educational system to such a degree that new teachers had to be credentialed on the fly to educate “the new sons and daughters of the homeland”.  The result was a deterioration and decline of education in our country, what with it taking second place to politics. Many of our professionals, in exile today, cannot forget the discrimination they endured in the universities, due to their religious beliefs or sexual orientation, following the triumph of the revolution.

For this and many other reasons, I would suggest to this young pioneer – and to all the children of our country – to fearlessly seek answers from capable persons to clarify their doubts, gathering as much information as they can independently, and taking a bit more responsibility for their own education. Sadly, in our schools today, politics and government orders take precedence over knowledge.