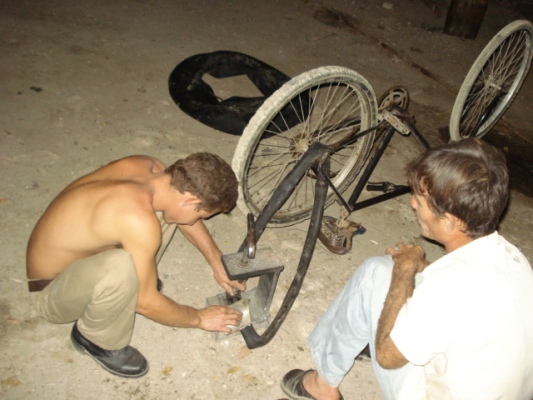 I’m astonished by the pretentious ordinances of those who have power. In a country like this one, where every five years, coinciding with the congresses of the holy Cuban Communist Party, people were encouraged to be efficient and to cooperate in order to make this a better nation, any attempt at economic independence was viewed as a sign of witchcraft. Every peanut vendor, weed clearer, piñata and birthday party supplies maker was watched closely by those who would rather suffer the punishment of an eight-hour work day in an inefficient workplace and looked on with envy to those who dared to break the chains of government control.

Now that they’re about to put out tenders for activities that were once not supervised, I laugh just thinking about how will they supervise the poor eastern Guajira who goes to Havana to take care of an old couple with sons or nephews in Miami: will that have to pay her in dollars? And Mr. Palacios, who cleans the house of a hotel manager on the outskirts of Holguín? How much will they have to pay him for each cubic meter of pruned branches from the gardens of the mansion?

I can’t imagine how my aunt Eloína (may she rest in peace) would have managed, with a room full of women who came to have their clothes sewn. She would mend, embroider, and even make shopping bags. This crazy new Stalinist attempt at supervising seems doomed before it even starts.

Roads and fences repairman, restorer of puppets and other toys, coffee roaster, hairdresser for pets, and many others, summing up 178 jobs that Cubans have been doing openly and unmolested, which now, with thousands of workers being fired from rundown factories and undersupplied workshops, the all-powerful state thinks it can control.

To put out a tender for economic initiatives in order to let society’s efforts flow towards employment and the common good, is fine. But the attempt at protectionism, with the intent to put locks and bars behind the door, when the dam that contains society threatens to break, is an act of hypocrisy that only sullies the face of the Inquisitor.