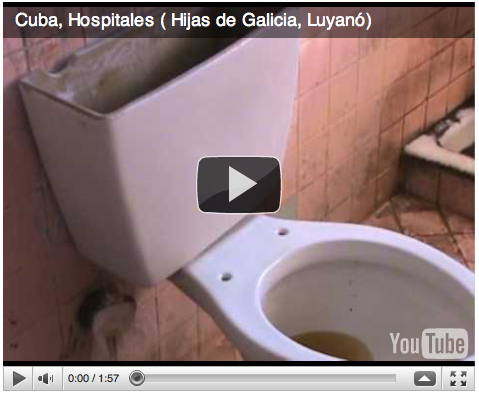 Armando, 71, was admitted at “Miguel Enriquez” Hospital, in the Havana’s suburb of Luyano, for what was supposed to be a low risk surgery in one leg.

Armando, who is diabetic, was hoping to leave the operating room with no complications and say goodbye to his daughter with a traditional meal and rum. She would be returning to New York — where she has been living for the past 12 years — the day after his surgery. It didn’t happen.

After the apparently successful surgery, he repeatedly had seizures and loss of consciousness. After being checked, the doctor found out that a rapidly growing bacterial infection had already started to devour his body.

Nothing could save his life. The doctor met with the family and, staring at the floor, informed them that the patient had only a few hours to live. “You can say your ‘goodbyes’ now,” said the doctor.

Between tears and surprise, the family kept wondering where he got the lethal bacteria. And the answer left them in awe: right there in the hospital.

The worse part is that this is not an isolated incident. A person who preferred to remain anonymous said that in this year, in the “Miguel Enriquez” hospital, about 30 patients have died after contracting lethal bacteria. “In the bathrooms and in the operating rooms is where they are contracting those bacterial infections,” added the person.

I went to several hospitals and urgent care clinics in Havana and what I saw scared me. With the exception of the National Hospital which was recently remodeled, the former Covadonga Clinic, and the “Luis de la Puente Uceda” urgent care clinic, the rest of the medical facilities’ buildings are in a deplorable state and in embarrassing hygienic conditions.

And the bad news keeps coming. The Cuban public health system is also sinking in the areas of pediatrics and OB/GYN facilities. It was confirmed to me by an employee of the OB/GYN hospital “Hijas de Galicia” in the 10 de Octubre municipality. According to her, last year five newborns died in that hospital due to viruses they caught in the same hospital where they were born.

Adela, mother of a three-year-old admitted in “Hijas de Galicia,” said she spent the night killing the roaches that were all over the room. “It’s an embarrassment. The bathrooms are depressing. The food is disgusting. And, as usual in Cuban hospitals, patient’s relatives need to bring everything from home; fan, sheets, towels and containers to save water. If my son has to go to that operating room, he could get an infection there.”

Despite the deterioration and lack of minimal hygiene, in the hospitals that I visited, there was always a team of doctors in the ER. They lack everything, and they still do everything they can.

The former “Dependiente” hospital is bad, but the absolute worst on the list is the “Miguel Enriquez” hospital. The interior ceiling is nonexistent and you can see perfectly all the electrical wires and AC ducts. On rainy days, the housekeeping staff spreads containers everywhere to catch the water filtering through the roof. Floors are being cleaned with no soap or disinfectant. Where there is some, they usually leave the premises in the personal bag of the employees.

In mental institutions and nursing homes for the elderly, the picture is even worse. One just needs to remember that in January 2010, 26 patients at the Psychiatric Hospital “Mazorra” died of hunger and abuse. In many nursing homes, the elderly have to go out to the streets to sell newspapers and cigarettes, and with that little money they make, the go to some state-ran small eatery to eat a meal as poorly prepared as the one at the nursing home, but at least a little bit bigger.

Without making a big fuss about it, the government of the Castro brothers has tried to do something about it. Last July they fired the public health minister, Jose Ramon Balaguer, one of the Revolution’s “historical figures.”

But things are still bad.

Because of the evident lack of money, the hospitals are repaired in baby steps. People can’t understand how Cuba can send medical help to other countries when the island is in need.

The excuse of the ’embargo’, when it comes to the purchase of medicines and equipment put forward by the government is questionable. In clinics designated to treat people from the outside, like Cira Garcia or in facilities for the Miraculous Operation patients, a project for eye operations for Latin American people, the hosting conditions and the food are of a great quality.

“Of course, they pay with dollars and the care we receive is free,” explained Joaquin, who has been waiting for two years for an operation of minimum access to his knee. Also the military high hierarchy and the government officials have well equipped clinics and latest generation medicines.

The Cuban public health care is one of the achievements the revolution most boasts about. If the situation is not reversed soon, everything achieved could be lost. That, for a Third World country, believe me, has not been a small achievement.