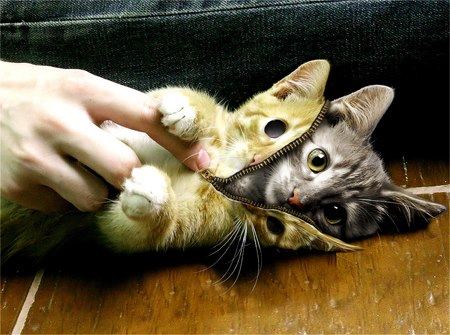 THE ODOR OF DEATH

As part of the un-secular Cuban Holocaust, the un-inhabitants of this city continue to kick life to the curb, abandoning newborn beings in a corner of the city, separating children from mothers with gratuitous violence, out of sheer malice or revenge perhaps for half a century an absolute State which violated us in turn.

I’m talking, of course, and for the nineteenththousandthninehundredandninetyninth time of newborn kittens that we starve to death in Havana. That is our revenge against the Revolution. Exile or death. In the end, most of these mewling creatures I kill, collecting them without exception and trying to give them good diluted milk, to cure their infected eyes, to give them a warm can or at least a warm look, and to wash the pee they urinate and the poop they make (in imitation of their mother’s tongue).

Of course here in Cuba death is not accidental. It is death of the Maximum Leader we somehow exorcise by killing thousands of innocent creatures (not counting the hundreds of murders that we happily cause in every concert or assault). Cuba as a morgue.

This time it’s true. The official comments no longer manage, nor will any denial or official photo of Fidel alive counteract the avalanche. Mausoleums are repaired and the military personnel removed. The ordinary people not even aware (I’m no ordinary Cuban, I am a Cuban prick).

The pixels of the Commander culminated in the best way possible, receiving the apostate blessing last March of Benedict XVI, who came to the island to incarcerate for days (and weeks, and months) countless Cubans, including me, and to initial, along with Jaime Ortega, the death always promised and long delayed for Oswaldo Paya.

The phrases of the former president, however, had better luck than his biology. He continued writing until mid-2012, and the demagogic realism ad usum became a grammarian surrealism of exception, with short circuits of meaning worthy of the avant-garde author he never was.

Now a cosmic cycle ends and with him the Castrozoical era of our small and perverse country. We kill animals at close range. At the same time we prepare the Great Collection of Theatrical Effects Transition. We take the measure of the mercy of the people and Counterintelligence specialists find that the level of piety is zero. Less than zero. From the Mourner in Chief we can move smoothly to the Holocaust of the Opposition. The ALBA of our new multinational country does not deserve to be born with spots on its uncivil citizenry.

I end up watching the last kittens die, the two I had collected from an area of embassies. Two little females. Black. Beautiful. Impoverished. Their eyes finally opened, always containing the stony pus of infection. Their bellies inflated by the lack of intestinal movement. Trembling with hypothermia despite the light bulbs and rags. In a drawer with the paper treasures of my unpublished work that never will be, like loving donations of the counterrevolution.

They weren’t given time to survive. They wouldn’t give it to us.