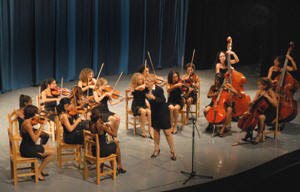 As in medieval times, when music, painting and other artistic expressions were under the wing of the Catholic church, in Cuba culture is sponsored by the State. But artists don’t knock on the doors of cathedrals nor present their projects to the despot, since there is a network of institutions that rule and control film, the performing arts, the plastic arts, books and literature, architecture and even the media.

I was thinking of the subjection of culture to the State on Monday, August 23rd, as I enjoyed the concert offered by Zenaida Romeu and her Camerata before the power elite, in honor of the 50th anniversary of the Federation of Cuban Women, created by the former First Lady to empower the females of the country.

Zenaida’s words as she presented each piece caught my attention. With delicacy and precision she spoke of music as an expression of liberty. I suppose that General Castro and his entourage did not notice that detail. Enveloped in the interpretive magic of these women, they were not attentive to these subtleties.

Many of our creative people sometimes act on stages that reaffirm the relationship between art and power. The Universal Hall of the Armed Forces, the steps of the University of Havana, the Plaza of the Revolution or the Black Flags Park on the Malecón, in front of the United States’ Interests Office, are only some of the ritual places.

It is almost impossible to control the manifestations of art and literature, since creation is a natural need of man as a social being. The predominance of the State can achieve, at most, that an intellectual elite, docile and well-trained, direct culture toward political ends.

With the revolutionary process started in 1959, culture continued its march, but its rhythm was changed. In half a century of messianic populism, several components of daily life and tangible and spiritual elements of the social dynamic were altered. There are reversible damages and representative faces of “revolutionary art”.

The commissaries dictated standards, demanded fidelity, and imposed mass culture through control of the radio, film, education and the media; but the creative universe of the island went into crisis around 1990, with the fall of the socialist allies that provided the resources for the country, accelerating the exodus of artists to other countries. But the bureaucratization of culture was maintained, intent on tying the creators to the network of State centers that instituted censorship and submission through awards, publication, recordings and travel, favoring opportunists and excluding those who defy the doctrine of the power holders.

Many public shows take place in this context of political schemes, as in the times of praising and singing to the Lord, when music and other artistic expressions revolved around the cathedral and the artists were dependent on generous patrons.