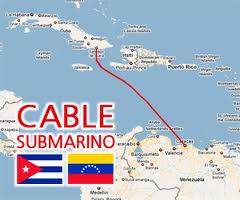 If you took a poll in our streets about Cubans’ most serious problems, the answers would agree on many points. Most people would talk about the cumbersome dual currency, the low wages, and the difficulties in finding housing. The oldest would talk about the poor pensions they receive, and many would also expound on the lack of freedoms and rights. The youngest, however, would list among their biggest problems lack of access to the Internet for people on the Island.Those under thirty don’t want to settle for seeing cyberspace in some remote place that almost no one can enter. They want to dive into that sea of kilobytes!

This situation of disconnect could be about to change. From the second week of January the U.S. company Renesys, which monitors Internet traffic, has noted that the fiber optic cable between Cuba and Venezuela is active. At a cost of $70 million, the tendon was installed in February of 2011, but still today it has not been publicly announced that it is working. In these two years, the secrecy has fueled rumors that the so-called Alba-1 failed because of corrupt dealings. However, today there is technological evidence that data is moving through the fiber optic cable.

As always, the official media is silent and many TV programs continue to show the Internet as a conglomeration of violence, pornography and false information. In the few public cybercafes, an hour’s access to the web cost a third of a month’s wages. Not a single internal signal denotes that something has changed. Many young people, however, are excited and anxious about the information from Renesys. The great World Wide Web may be closer than it appears.