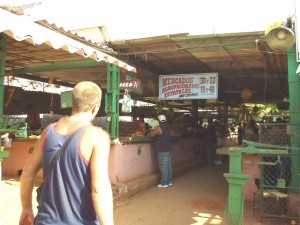 Serafín, 69, never had toys. For his 8th birthday the gifts from his father were a pick and hoe. He woke him at 5 AM and they went to work in a row of onions. He told him, “If you want your children and grandchildren to have toys, you will have to get it out of the earth. Mother earth will give you your present and your future. There is no other option.” And that is how it has been for over five decades.

A descendant of immigrants from the Canary Islands, strong as a ceiba tree and with the blood pressure of a young man of 20, Serafïn is the owner of a small farm in the province of Sancti Spiritus, 300 kilometers east of Havana.

To get to his farm one must walk a long way and then cross the Zaza community dam, which looks like an inland sea, go along a dusty road where the invasive marabou weed and greenery stretch as far as the horizon and, after crossing a puddle somewhat dried up by the drought, reach a small village of poor people who eat little and poorly but who drink a lot of rum. Just behind the little village is Serafïn’s farm.

In its good days it had dozens of fruit trees and 120 cows. Fertile land that produced hundreds of hundred-pound sacks of onions, rice, greens and vegetables.

Old Serafïn and his children and grandchildren still live on the land. But the agricultural policies of the government do not inspire them to work. “Look, Acopio (a state-owned company) pays only two pesos and 80 centavos for a kilo of onions. And the people at the market buy them at 10 pesos a pound. In 2008, after President Raúl Castro began to pay three pesos a liter in order to stimulate milk production, I delivered almost a thousand liters a day. Things were not going bad for me. But in November of last year they raised the cost of a kilowatt from 0.75 to 1.30 an hour. And from the 2,500 pesos (100 dollars) I used to pay a month for electricity I now pay almost 10,000 pesos (400 dollars), which raises my cost of milk and agricultural production,” the farmer says while smoking a hand-rolled cigar.

According to Serafín, the government gives them supplies at non-subsidized prices. “They sell us a gallon of gas for 6 dollars. And the seeds and work tools are very expensive. Due to the drought, my family has had to make investments and buy pumps to extract water from wells and reservoirs, which makes our use of electricity skyrocket. If you add to this the fact that 80% of our production is sold to the government at laughable prices, you can understand why there is so much empty land full of blight and marabou weed.”

Serafín says that for a while he preferred to sell the cows to the government instead of using them for milk production. “The last straw,” says Augusto, Serafín’s youngest son, “is that at times we have to steal our own crops”. And when the inspector comes they claim that the crops were stolen (robbery has become a daily occurrence in the Cuban countryside), in order to have a little extra food for selling in the farmers markets where the law of supply and demand is in effect.

“The government forces you to lie and fix the figures. I think that not even the old feudal owners demanded they be given such a high percentage of products. In countries that are agricultural powerhouses like the United States, the government subsidizes the farmers. This is logical, since you don’t fool around with agriculture when you have to feed 300 million people, in addition to exporting food for 2 billion more all over the planet,” comments Serafín, a guajiro who likes to read and keep himself informed.

For him, if the regime really wants to fill family tables with vegetables, fruit and pork and for people to have coffee with milk for breakfast, it should create a law under which the State is not sold more than 15 or 20% of production.

“Laws that give you a guarantee. No regulations or orientations, that are exchanged for others according to its convenience. I do not know any small landholder that is not upset with the government. That is why when people travel around the island they see kilometers and kilometers of land that is not being cultivated. Nobody wants to work the land. There is very little stimulus,” says Serafín.

Before 1959, he remembers, Cuba had more than enough fruits and vegetables and even exported them. “But for that to happen, the government must change its abusive methods. The main responsibility for the scarcity of agricultural and cattle products is the Cuban government,” he states. That simple.