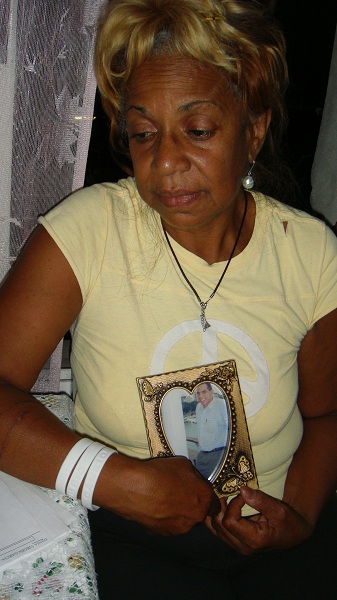 Sixty-four year old Lilia Castaner, a calm-voiced woman who for 8 years has lost her smile, lives in an old multi-family house in the Vedado neighborhood, just steps from Havana’s Malecon.

The last time she heard any news on her only son, Omar Rivera Castaner, was on March 29, 2003. The harrowing drama which Lilia lives is full of absurdities, careless bureaucracy on behalf of Spanish authorities, and the suspicion of macabre events.

Here’s her story. Omar Rivera was born on July 16th, 1970. He was a track and field athlete. He became licensed in sports and he led a calm and routine-driven life.

“He didn’t drink alcohol and he never engaged in drug use. His hobby was to listen to music and to watch TV with his girlfriend. He was a calm kid. In 1994, in the midst of the rafter crisis, my son became drawn to the idea of leaving Cuba,” says his mother while she goes through a photo album which contains pictures of Omar.

During the end of the 90’s, Rivera Castaner worked as a cook at a 5-star Havana hotel. In 2000, he enlisted as the equipment manager of a band which was supposed to go on tour for 6 months in Spain. He abandoned the musical group and began living his life as an undocumented immigrant. He was the typical Third World citizen which arrives to Spain with the idea of working hard to help out his family with money. He was one more.

After going from city to city throughout Iberia, he stops in Alicante. There, in that Valencia Community, a fellow Cuban, Jose Luis Gonzalez Sonora became his first contact. Sonora puts him in contact with Juan Angel Sirvent Segui, a Spanish co-owner of CELULIMP, a perfume manufacturing company.

Sirvent Segui gives him a contract through “the right”, as we say in black-talk. He then starts working as a warehouse truck driver. He would talk to his mother once a month on the phone and he wished to initiate the processes necessary to legalize his stay in Spain.

And that is when the story of Omar Rivera Castaner begins takes a turn, almost as if it were a soap opera. After March 29, 2003, Lilia has not spoken to her son. She also has had no factual news about where he might be.

After a few months of having not heard from Omar, his mother contacted some relatives of Jose Luis, the Cuban who extended a helping hand in Alicante. “This Jose Luis, an intimate friend of Sirvent Segui, supposedly was a brick-layer in a business owned by Sirvent which sold home supplies. He would travel to Cuba each year. After my son disappeared, the life of Jose Luis has greatly changed. He was able to get his family out of Cuba and even bought his brother a house in Alicante for 90 thousand Euros. In addition, he has paid 6 thousand Euros to a Spanish citizen so that she could marry his brother”.

In her small kitchen, Lilia makes some coffee. While she drinks it, she continues chatting with her calm voice and sad stare. “In his trips to Cuba, Jose Luis began to avoid me. Whenever he spoke to me, he never stared into my eyes. He gave me a couple of versions of the story. In one of those versions he assured me that my son was at a drug addiction center in the neighborhood of Los Angeles in Alicante. In another version, he told me how he had personally taken him to the house of a friend, later telling me that Omar had left that house and that the last time he saw him was at a beach in Benidorm. Many incongruities. I always asked him why my son didn’t call me or didn’t send me a letter through the mail. After I insisted over and over again, Jose Luis violently reacted. He attacked me and kicked me out of his mother’s house in Havana”.

As for the Spaniard Juan Angel Sirvent Segui, it was just more of the same. Sirvent, who was married until recently with a Cuban named Zuzel (with whom he had a son) also avoided the incisive questions of Lilia Castaner.

“In an attempt to calm me down, Sirvent sent me a letter telling me that he had submitted a complaint to the civil guard station. Through my investigations I discovered that Sirvent had told relatives of Zuzel, his wife, that he had caught my son in bed with her. I also found out that Zuzel had a romantic relationship with Jose Luis. I’ve tried just about everything to obtain any news on Omar. I have gone to the Spanish Consulate in Havana dozens of times and they have never given me an answer. In 2008 in the offices of the Cuban Ministry of Exterior Relations a lawyer assured me that my son did not appear to be at any drug addiction center in Spain”, Lilia recounts with a lost stare.

Without an adequate judicial consultation, and with minimal attention on behalf of the Spanish consulate functionaries, Lilia has contacted various Spanish non-governmental organizations which dedicate themselves to search for missing people.

“Always the same response: nothing. At the beginning of the year I sent a fax with a complaint to the Alicante civil guard located at District 95. Emilio Garcia, the superintendent, promised to investigate the case. But everything has been very slow, or hasn’t been at all. My motherly instinct tells me that they killed my son. Because of a woman. Or for organ trafficking. I feel that Jose Luis Gonzalez Sonora and Juan Angel Sirvent Segui are hiding many things. I do not understand why the Spanish authorities cannot give me a concrete answer. Spain is not North Korea. I am desperate. I am only a mother who wants to know what has happened to her son. The pain consumes me”, Lilia says while she cries in silence.