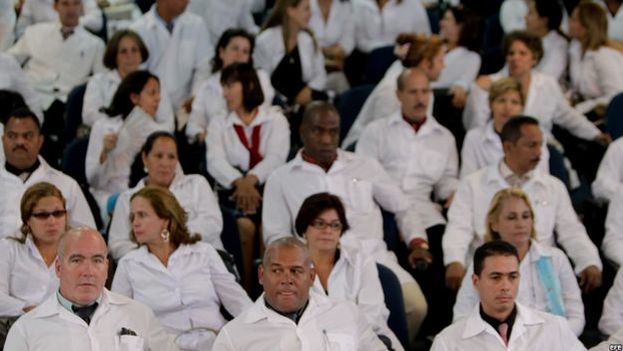 14ymedio, Havana, 17 November 2018 —  The Cuban doctors in Brazil will have customs advantages to import their belongings, according to a note from the authorities of the Ministry of Public Health, to which 14ymedio had access. The flexibilization has been accompanied by pressure on their family members to convince the doctors to return to the island.

The announcement comes a few days after the Cuban government announced the withdrawal of the more than 8,300 doctors who are working in the Mais Medicos (More Doctors) program in Brazil, after the president-elect of that country, Jair Bolsonaro, offered these health professionals political asylum if they decide to avail themselves of it.

“To support them and reduce expenses, we decided that for everyone who sends unaccompanied cargo to Cuba by different means, that cargo will be considered as Household Items, which implies not paying the duties in any currency,” explains the Medical Mission’s communication.

Even doctors who had already traveled on vacation to the island will be allowed to import additional products paying in the national currency, an exception to the strict Cuban customs rules that require payment in hard currency after the first annual importation.

However, for many of the professionals these measures are not enough. “It costs money to send our equipment to Cuba. What are we going to come with if they announce the end of the mission from one day to the next?” says one doctor under the condition of anonymity.

The other option that the authorities have given is for the doctors to sell everything they have and bring the cash. “I’m trying to sell everything I have. But what I can’t sell I will take to Cuba. I do not know if I can take a container on the plane, but what is certain is that I’m not going to leave it here,” said a doctor in a voice message sent to the directors of the mission through WhatsApp.

Another doctor regretted that they were only allowed to carry 40 kilograms (88 pounds) on the plane home. “I’m taking my air conditioner with me,” he said. “Look for two planes because I’m taking everything, doctor. Look for two planes because all I can get for an AC is 100 reales and I will not sell it because it cost me 2,200 reales. I do not know if they are going to find me a separate plane,” he added in a voice message to the directors of the Medical Mission.

Doctors are dismayed by the authorities’ recent visits to their relatives on the island to pressure them to return. “They went to visit my daughters. They are minors, they are girls. However, they went there and asked them if their mother had told them that she was going to stay in Brazil and that they should tell me not to stay, to return to the country,” lamented one doctor in communication with this newspaper.

Another doctor denounced the visits they made to his mother on his Facebook profile. “As my house was empty they went to my mother’s house. For the first time, she had the pleasure of seeing the family doctor who had never visited her despite her having suffered a heart attack and having blood pressure problems. They went to threaten her with measures in case I stayed in Brazil,” said the doctor.

In the official media, the campaign against Brazilian President Jair Bolsonaro has also been strong. “Puppet of imperialism, fascist, far right” are the descriptors used by Cuban Television.

In a recent interview, the provincial director of the Ministry of Public Health in Guantánamo, Roilder Romero Frómeta, insisted that “there will be no reason for the desertion of health personnel” in Brazil.

Romero, former coordinator of Mais Medicos, said that those returning from Brazil will not be “regulated” — the official term used to describe the act of banning individuals from traveling outside the country — and may emigrate if they wish, but threatened those who break the contract and take refuge in the asylum offered by Bolsonaro with the application of the law that prevents them from returning to Cuba for any reason for eight years. “Health professionals in an official mission who have left have may not enter the country for eight years. There is no reason for them to defect,” he said.

On Friday, the president-elect of Brazil, Jair Bolsonaro, said that the situation of Cuban doctors is “practically slavery” and reiterated his promise of asylum for those wishing to leave the Cuban medical mission. Bolsonaro also considered it “unfair” and “inhumane” to assign the medical attention of Cuban professionals who have “no guarantee of quality,” to the poorest Brazilians.

The statement refers to Cuba’s refusal to have its doctors take the necessary examination for any foreign doctor working in Brazil. According to the president-elect, the government of Brazil has never had proof that the professionals sent by Cuba are competent.

Bolsonaro’s demands for Cuba’s continued participation in the Mais Medicos program, include requiring Cubans doctors to take the Brazilian examination for the revalidation of their credentials; requiring the full salary paid for each doctor be paid directly to the doctor (currently the Cuban government keeps 75% of the payment); and the right for the doctors’ family members to live with them in Brazil for the full period of their mission.