Reinaldo’s family had finished dinner when, in passing — it wasn’t headline news on the nightly broadcast — Rafael Serrano, the histrionic presenter, read an official press release from the Ministry of External Relations revealing the regime’s point of view with regards to the North Korean cargo ship Chong Chon Gang, intercepted at the port of Colon, Panama, with conventional weapons and anti-aircraft missile systems belonging to the Cuban armed forces.

“The information isn’t clear, Reinaldo speculates. “Supposedly the army sent that batch of obsolete weapons to be modernized in Pyongyang. It seems that the grandson of Kim Il Sung, the current leader in the isolated nation, has factories to modify and renovate Russian weapons. I do not know what’s behind it. Or of Cuba is selling old weapons to North Korea to strengthen them militarily, or if the Cuban State is in full modernization of their old weapons and if so, I wonder what the goal it.”

The regime’s version says that the batch of obsolete weapons manufactured in the last century traveled to North Korea to be renovated. As a rationale, it invokes  sovereignty and national security. A former soldier consulted explained that whenever a nation is caught in such an action it justifies itself with external threats.

“In any government, democratic or autocratic, there are authorized groups within the sewers of power who do the dirty work. An example is the case of former CIA analyst Edward Snowden. The young man has brought to attention the broad U.S. electronic eavesdropping on global communications. Barack Obama is left with the evidence. And it’s the case in Spain with Luis Barcenas, former treasurer of the Popular Party, who with his explosive statements can blow up the executive of Mariano Rajoy. But in both countries there is freedom of expression, journalists investigate things and publish them. In Cuba, thanks to the absolute power exercised by the government over the media, it is easier to manipulate citizens,” argues the former soldier.

According to the retired soldier, it is true that Cuba’s weaponry is defensive and outdated. “The armed forces’ most modern technology, such as the MIG-29, T-62 tanks and anti-aircraft missile systems ,are antiquated. The topic of discussion is why Cuba now decides to modernize its weaponry. There is no threat from United States: against its power and advanced technology, it would mean little or nothing to renovate existing arsenals. I think it’s a matter of business and they were selling those weapons under the table to North Korea.”

In the quiet Sevillano neighborhood south of Havana, people didn’t pay much attention to the North Korean ship detained in Panama. The youngsters, on vacation, played football with stones marking the goals.

On the streets, vendors hawked onions at a good price. A tall gray-haired man was engaged in buying gold jewelry. And two burly men were repairing old mattresses in the garage of a house.

What the North Korean ship also caught by surprise was ordinary Cubans. And if something caught my attention it was the fact that old weapons were hidden under 10,000 tonnes of sugar, a product in decline on an island that was once the ’world’s sugar bowl.’ 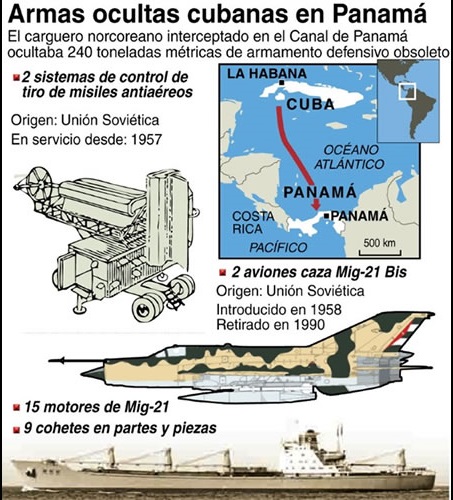 Photo and computer graphics taken from La Prensa of Honduras.