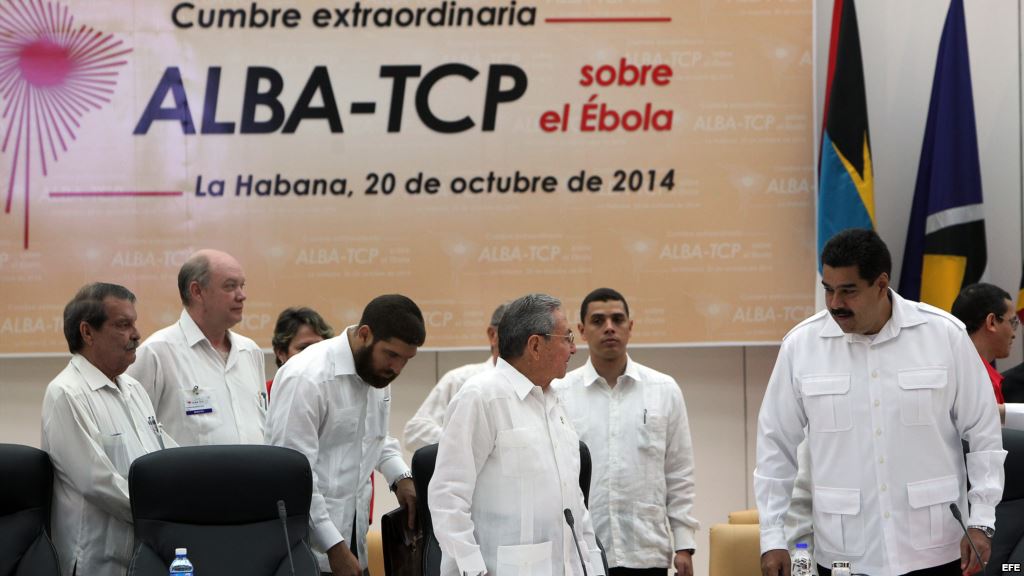 Every interesting story has light and dark parts, epic actions, and a protagonist who inspires. The rest consists of weaving reasons and emotions together by way of origami.

The Cuban government knows very well how to put into practice its habitual juggling act in order to locate itself opportunely at the center of all news flashes. Cuban doctors have been sent to fight the Ebola epidemic in West Africa, and by taking advantage of this, the government feeds the false image of having no self-interest in this new theater of war, where everything is tested, even human sacrifice.

We could see that during the recently-concluded Summit of the Bolivarian Alliance for the Peoples of Our America Trade Treaty of the Peoples (ALBA-TCP) the moment of emotion was at the meeting of the heads of state, delegations, and invited personalities with the Cuban collaborators from the medical brigades, who that same night, October 21, left for Liberia and Conakry, Guinea.

Hail, Caesar; those who are about to die salute you. They know that if they become contagious they can’t come back to the country until they are cured or die. A hard but wise decision, because the island is not prepared to receive the sick without activating the usual chain of errors that, as we already know and even have suffered, facilitated the epidemic proliferation of conjunctivitis, cholera, chikungunya, dengue fever, and a long list of contagious etceteras.

The photo of the Summit is beautiful, but the Summit didn’t provide much. A declaration with 23 points of agreement and little money. Cheap politicking. The illness continues unabated. According to data offered by Mr. Bruce Aylward, the Assistant-Director General of the World Health Organization, the situation is alarming. They have confirmed cases of infected people in seven countries, and it’s estimated that by the beginning of this coming December, if things continue as is, the number of people infected with Ebola could reach 5,000 to 10,000 cases weekly.

It’s clear that the Cuban government wants to pursue more than just aiding and combating the mortal virus. With this new crusade, in addition to confronting an emergency, it will receive a spurt of dollars to spend excessively without needing to justify it. The government is developing a strategy to favorably influence the UN vote on human rights and the American embargo. A key point.

It’s clearly persuasive. There is no greater veneration in the human condition than for the action of saving lives — even more captivating when the effort means risking your own.

We can criticize them or see from the computer how General Raul Castro and his buddies are gaining space in Realpolitik (practical interests and concrete actions). The other option would be to equal or, even better, to surpass them. To silence, with real actions, the humanitarian chatter of the Cuban revolution, its hapless friends of ALBA, and its cousins in the TCP.

But for that we would have to be ready not only to  help the needy but also to define who we are and what exiled Cubans can do. To act together with international organizations who work in the center of the crisis. To buy medical and hygienic supplies, protective uniforms, stretchers, gloves, disinfectants, and instruments for the centers that treat the sick. It’s not difficult.

Certainly we can continue believing that we create a homeland on the Internet, or we can grab the limelight away from the revolutionary government. But that, paraphrasing the title of the bolero, is for you to decide.