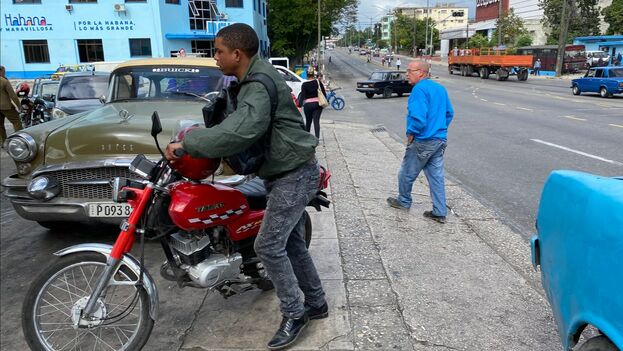 14ymedio, Havana, 24 January 2020 — All the people waiting in a long line to buy rationed chicken in the Plaza of the Revolution district this week were wearing heavy coats, woolen hats, high socks and/or scarves. At least two elderly women were draped in blankets. Though the scene was reminiscent of the Russian steppes or the Swedish coast, it was actually in Havana.

In recent days Cuba has been experiencing its lowest temperatures in forty-three years. Thirty-two of the island’s meteorological sites have recorded temperatures of less than 10 degrees Celsius (50 degrees Fahrenheit).

In a country where it is “always summer,” as tourism slogans boast, people are poorly prepared for the few brief periods each year when thermometers drop below 15 degrees. Most houses do not have tightly sealed windows. Coats and winter clothes are of poor quality and generally intended only for a slight drop in temperature. Staying warm with soup or hot drinks can also be challenging due to food shortages, which have increased in recent months.

Some people are just happy not to be sweating all the time. Many look upon this time of year as “the season of love,” when couples can enjoy cuddling more. It also gives those who own imported coats or winter accessories the opportunity to show off a garment that would otherwise spend all year in the closet.

Many parents choose not to send their children to school when temperatures drop below 20 degrees. Absenteeism increases dramatically as getting out of a warm bed becomes a herculean effort for many schoolchildren and workers, especially for those with jobs that require them to be outdoors, in factories or guarding the exteriors of government buildings.

Perennially popular beaches and swimming pools empty out. Households use less water as many residents opt to forego showers, a relief to those families who in recent weeks have experienced serious disruptions in their water supply due to widespread repairs.

The line at the always busy Coppelia ice cream emporium gets shorter while shops that sell coffee or hot chocolate see increased demand. Owners of privately owned restaurants seize the opportunity to offer more stews, black beans and hot creams. At family dinner tables soup takes center stage, which helps to stretch servings of meat or chicken. Those who do not have access to either resort to using instant bouillon cubes or bones.

In light of the current low temperatures, animal welfare activists have asked for donations of clothing to help protect stray dogs and cats. Several private organizations have redoubled efforts to find and shelter animals abandoned in the streets.

Two stations also recorded their lowest temperatures ever. One of them was in Veguitas, in Granma province, where it reached 7 degrees Celsius (32 degrees Fahrenheit). The last time temperatures in the province were this low was in January 1977 at a weather station in Jacarito.

The other weather station that set a record was in Manzanillo, also in Granma province, at 10.1 degrees, significantly lower than its previous record of 12 degrees, also set on January 21, in 1977.

Another low was recorded at a weather station on Isla de la Juventud, equal only to the 7.7 degrees reached on January 20, 1977.

The newspaper ADN reported that a man died of hypothermia in Villa Clara, an unprecedented event in the province. Published reports indicate, however, that the deceased, a 54-year-old resident of Remate de Ariosa, had alcohol-related problems and fell asleep in the open air after allegedly ingesting large amounts of alcohol, a combination favorable to developing hypothermia.

The man’s body, partially shielded by the statue of a a crab, was found by workers at a gas station in Caibarien, a town that has seen temperatures fall to as low as 11 degrees.

Traditionally, those most vulnerable during these cold fronts have been elderly persons who live alone and homeless people who sleep in parks and doorways. But travelers who wait at bus stations before dawn, and patients at hospitals and mental institutions can also fall prey.

In January 2010 low temperatures and administrative neglect led to the death of twenty-six patients at a psychiatric hospital in Havana known as Mazorra. Images of their emaciated, abused bodies were quickly circulated by cell phones, which were already becoming common in Cuban life at the time.