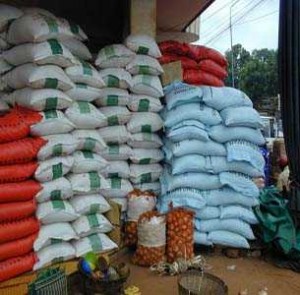 HAVANA, Cuba, October www.cubanet.org – Of the approximately 770,000 tons of rice consumed by the Cuban population last year*, 440,000 were imported from Vietnam, Brazil and the United States. As a ton of rice trades on the world market at $450, the Cuban government had to spend $200 million for the purchase of this food.

Two years ago, rice production was going through a severe crisis in Cuba. There were great difficulties in the harvest due to the advanced deterioration of agricultural machinery, lack of means to transport the grain and the total abandonment of the roads. Inability to harvest the rice at full maturity is a source of great losses.

There were few dryers, mills, silos and warehouses, and the vast majority were in pitiful condition, unmaintained for years. With limited industrial capacity and storage, some provinces were forced to send the harvested grain to other provinces that had dryers and mills for processing, thus incurring costs for fuel, wages, etc.

This situation resulted in low yields that did not meet the needs of the population. The deficit in rice production was offset by foreign imports.

But as of mid-2011, the Ministry of Agriculture launched an investment and retrofitting process to reverse the situation. The state allocated substantial resources for the purchase of agricultural machinery and means of transporting the grain. It embarked on a process of building new kilns, mills, silos and warehouses, while the existing facilities are being repaired and modernized.

Similarly, it undertook the rehabilitation of irrigation channels and roads.

Take the case of the new Guama River diversion in Pinar del Rio, which, with El Punto Dam in the town of Consolación del Sur, ensures irrigation of the Vuelta Abajo rice plantation through a more than 12-mile system of channels.

Since last year, the cultivation of rice in Cuba has undergone positive changes. The provinces of Pinar del Rio, Villa Clara and Cienfuegos reported 86,000 acres harvested in cold and spring sowings. Timely delivery of fertilizer, herbicides, fuel, more efficient water use, among other assurances made it possible for these three provinces to report a production of 42,000 tons of wet rice this year, which represents an increase of 35% relative to what was reaped by those provinces the previous year.

In Villa Clara a mill has been built that will process 220 tons of rice a day, and three silos were built, each with with a 1,100 ton capacity, plus a warehouse with a capacity of 1,980 tons. With these investments, by next year the province may end a daily transfer of 275 tons of wet rice to Sancti Spiritus and Matanzas for industrial processing.

But not everything is going smoothly. In Los Palacios in Pinar del Rio Province, the Air Services Company’s failure to meet its commitments in rice planting, along with the delay in the application of fertilizers, herbicides and insecticides, caused severe damages to this year’s production. Rice production was down 43,700 tons and there was a significant decrease in yields per acre.

The agricultural aviation executives argue that their priority is not the rice companies, but spraying against mosquitoes in Havana, in the tourist resorts of Cayo Coco and Cayo Largo, and in the city of Pinar del Rio.