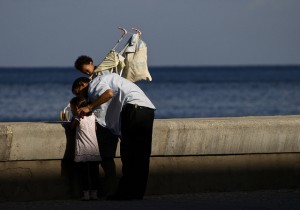 For Ricardo, 32, the worst business one could have in Cuba is to have kids. “I have two and I know what I’m talking about. If my old lady didn’t get rid of them it’s because the gynecologist told us that if she had another abortion she could be left sterile. After pulling our hair out we decided to have it. And God punished us. We got twins.”

Many couples think like Ricardo. Abortion as become a contraceptive method in Cuba. It’s practically irresponsible.

Heidi, 27, is going for her 5th abortion. “The doctor would not let me, but stronger than his medical ethics were the 25 dollars that I put in the pocket of his coat. It’s crazy to have a child now. I live in the room of a tenement with a large family and some sleep on the floor. I work in a pharmacy and earn 290 pesos (12 dollars). My boyfriend does not work. Every time I get pregnant, I get an abortion.”

Abortion is almost a sport for some Cubans. The doctor Raisa blames couples neglect when they have sex. “Young people don’t like using condoms to protect themselves. And girls often don’t have any contraceptives. Cuban public health should be more rigorous about abortions. the situation has gone from bad to worse.”

Interruptions of pregnancy are free on the island, like the rest of health care. Even though there are doctors who take money under the table to do abortions. According to a Havana gynecologist, he makes about a hundred dollars a month. “They also give me nice presents, even a leg of ham in one case.”

But the dance of banknotes occurs when doctors go on aid missions abroad. A report in the Wall Street Journal published in January 2011 by Joel Millman, gave a clue about the behind the scenes business of Cuban doctors performing abortions in African nations and the Middle East. Joseph, a physician who spent 3 years in South Africa, said that to offer abortions in these countries is a way to return to the island with enough money. “If things go well you’ll even make enough money to desert. ”

Institutions like the Catholic Church have take on the issue of abortion full tilt. The dissident physician Oscar Elias Biscet, recently released on parole, has been a leading voice against indiscriminate termination of pregnancy. Dr. Hilda Molina, now living in Argentina, conducted a crusade for years against the use of fetuses in the production of drugs by national scientific institutions.

No doubt, Cuba is the country in the Americas that provides the most facilities for the practice of abortion. One of the harmful trends generated by the revolution. The precarious living conditions and homelessness have caused a high number of women choose abortion, sometimes after more than twelve weeks of gestation. The official media do not touch the issue publicly. As if it didn’t exist.

Mass practice of abortion and little desire to have children by couples, are contributing to the rapid aging of the population. If life is difficult for young people, imagine the elderly. Cuba is not a good country for old people. By 2020, there will be more seniors than children aged between 0 and 14. Add to this that every year 20 thousand people migrate legally to the United States, hundreds of them still of childbearing age.

The Havana gynecologist believes that such a large number of abortions is also a response to dissatisfaction with the status quo. “They do not care to have a child in a country full of scarcities. There are women who get rid of them because they are waiting to leave and want to give birth abroad, with more resources. It is unfortunate, but that is happening. ”

Fidel Castro’s revolution has been an efficient factory for producing shortages. Quite the opposite in the case of abortion. You can give him a gold medal.