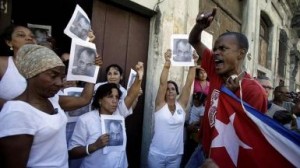 MADRID, Spain  November www.cubanet.org That the Cuban government was elected to the United Nations Human Rights Council has made headlines these days. However, it should not be news, because the first 47 members joined the organization established in March 2006 to supplant the Commission, whose ineffectiveness needed to be addressed. Cuba remained during the allowed two three-year terms, and waited for another opportunity to rejoin the eight representatives from Latin America and the Caribbean.

On this occasion, China and Russia also make up the 14 countries added, with the corresponding international criticism for their flagrant human rights violations. However, it is not strange event, considering member countries like Saudi Arabia, Morocco and Nigeria. Ghadafi’s Libya was part of it until 2011, and Chancellor Treki chaired the 64 sessions of the UN General Assembly in 2009. All UN member countries have the right to be elected.

Venezuela is a member of the Council for the period 2013-2015, which began earlier this year. On 14 November, President Maduro achieves special powers through the Enabling Act approving the National Assembly, saving the voting hurdle necessary. His party has 98 seats and the opposition 67, but to govern at will he needs 99 votes. In an imitation of the full power of Chavez, he revived the accusation of corruption filed against the deputy Maria Mercedes Aranguren, defector from Chavezism, with the intention of lifting parliamentary immunity, he quickly published it in the Official Gazette and replaced her with Carlos Flores, who would have no choice but to give the vote necessary because, as discussed in Caracas, he would be compelled to resolve their dispute with the power that had even expropriated part of his estate.

To the highly-gifted Maduro, Chavez in the form of a little bird recently appeared in an image that was blur for the rest of us, but with his skills as a copyist and the advice of his first lady counsel, he launched an assault for absolute power. However, he lacks the charisma of the caudillo-commander-President, or the unconditional support within the Chavistas. More dangerous still is this man with his threatening supernatural harangues, his disastrous and interventionist economic measures against private property that deepen the shortages, the economic crisis despite the flood of petrodollars, the estrangement of private and foreign investment, and the inflation and massive corruption .

The game with the mechanisms of democracy of Fidel Castro and Hugo Chavez did not turn out equally with an heir unsure of himself and completely lacking in talent. But President Maduro will be on the Human Rights Council as Ghadafi was, proof that the agency has not achieved its main tasks and shows that truth can not be covered with votes of friends and violators. In Geneva, they wrapped their representatives with the islanders, while in Cuba went from being frustrated by the mistakes of the heir to intensifying the search for promising economic support, which urgently leads to Brazil.