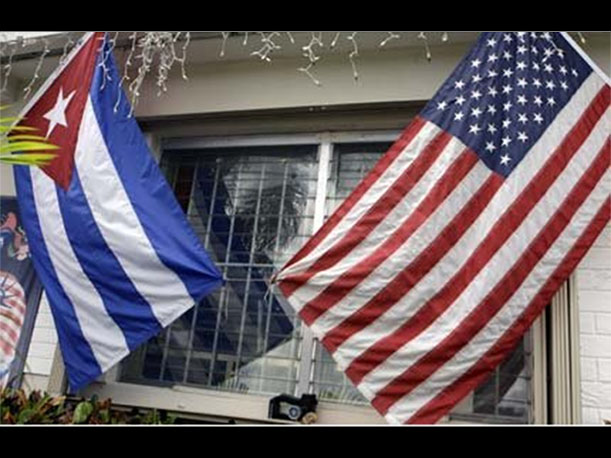 The decision by the governments of Cuba and the US to normalize diplomatic relations could go down in the record books as the news of the year – and among the most momentous world news of the century so far. The more than 50 years of litigious relations – one of the longest disputes in human history – will justify every headline, column, or essay that will be devoted to this topic.

But it is worthwhile to reflect objectively on the possible consequences that this decision will have on the Cuban people – a decision made without taking into account the internal opposition voices that for years have been sounding alarms about the potential dangers of repealing instruments of pressure such as the US embargo and the European Union Common Position – without the Olive Green government having, at least, ratified and implemented the International Covenants on Human Rights that it signed in February, 2008.

A lifting of these coercive mechanisms without a minimum guarantee that these agreements – as well as other demands made by Cuban civil society – will be implemented, would imply the definitive and certain recognition of legitimacy that this dynastic government so badly needs – right when it knows itself to be crushed by historical evidence, and seeks, desperately and at any price, some escape route.

For a long time I have counted myself among those who opt for the end of the embargo, because I have always thought that without this great excuse, within a very short time the Havana totalitarian regime’s economic inefficiency, a purely endogenous evil, would definitively be shown for the sham that it is. I am still today convinced of this argument, but the coincidental timing of a series of very specific circumstances, in the midst of an unprecedented context, has made me question several points in this regard.

There is one essential difference between this particular moment in time and any previous phase of this Stalinist regime. By now it is quite clear that the old guard of the Sierra Maestra has run out of time. The failure of their proposition is no longer something yet to be proved; it is established historical fact.

These octogenarians know full-well that the days of free petroleum that Moscow provided for 30 years will never be seen again; that for now, China might be smiling, but in business matters, a deal’s a deal, payment will be required, and then, what will they do?

Cuban officials also know that under the conditions that were in force until this past 17 December – and despite their much-vaunted Foreign Investment Law – they would be unable, given their well-deserved reputations as petty con-men, to deceive any important foreign investor with half a brain in his head. Besides, they know that Cuba’s tourism industry will never take off because it cannot compete with all the surrounding excellence in the region – and that they lack the financial resources to repair this mega-disaster.

On top of it all, they know that their main source of revenue – the exploitation of public health professionals – is in imminent danger of a major setback if its principal market, Venezuela (which appears about ready for the death sentence) succumbs. In addition, the ever-increasing emigration of qualified personnel from this sector augurs the potential downfall of this dirty global money-laundering operation.

For all those reasons, the Castro regime strategists long ago looked towards the brutal and disordered North that despises them and fixed their hopes on that lifeline that Obama is now casting to them just when they were exhaling their last breath…

Now, the generalship (which in another time might have been intransigent) will once again open its legs (as it did for that community of beaten-up gusanos (worms)** in 1980, when it ran out of money in the 90s). Now “The Enemy,”*** which presumably is the same one to whom not even an inch can be given, is suddenly transfigured (to the surprise of some and the rage of others) into the floating piece of wood remaining after the shipwreck, the lifesaver for an eternal Robinson Crusoe who had already wreaked as much damage as possible upon his lost island.

In spite of all this, I remain a supporter of the lifting of the embargo but only – and this is non-negotiable – if this act is accompanied by, or is conducive to, the unconditional deference to the human rights of my people by the low-lifes…I’m sorry, I meant to say, by the apex of the Cuban establishment.****

However, once this decision is made, two unavoidable consequences appear on the immediate horizon. On the one hand the Cuban government will breathe easy, receiving in the short-term a respectable income stream that otherwise would have been out of reach (or, and it’s the same thing, it will feel safe and more secure than ever to refine new repressive strategies).

On the other hand – and this is their favorable edge – this totalitarian government has finally run out of its principal justifying argument against its “perpetual enemy” and can no longer maintain its stance as “a besieged people” (or, and again, it’s the same thing, from this moment on, the world will judge that our economic ruin is really due to the stubbornness of the Cuban leadership that kept this country stuck in the past).

In case things remain as they are portrayed to us, the Cuban people will continue being deprived of such basic civil and political rights as that of opinion and freedom of thought, of assembly and association. The regime will continue vetoing our right to access the uncensored Internet.

This is what very likely would occur starting now, assuming that in this mise en place all the pieces have been shown to us. I say this because I do not discard the possibility that between both governments there has been a much deeper and more ambitious roadmap drawn up than what has been publicly announced. At first glance one has the impression that the US gave up too much for the little offered by Cuba – and that if both parties have demonstrated anything in common, it is how obstinate they can be when they think are right.

The evident asymmetry of the proposals is surprising, even suspicious. On the US side, there is so much that reflects a splendidly generous Obama. As for Cuba, we have a grey Raúl Castro focusing on the return of the three prisoners, while relegating the end of the half-century embargo to an aside, as though speaking of baseball season playoffs.

From this I infer that there is much more to these proceedings than meets the eye –especially if we consider, in all its weight, the direct intervention of Pope Francis.

Also, I do not discount the megalomaniac instinct of the Castros requiring that all announcements be issued progressively, in a scattered manner – slowly but relentlessly, in Raulist language – so that there should be no ugly impression that in the end they surrendered before the evidence that Fidel Castro publicly recognized years ago, that the Cuban economic model doesn’t work.

To accept this proposal would not be at odds with the pragmatic North American spirit, for which the only important thing is to achieve the stated goal, even more so if the sole obstacle is something so fragile and simple as the injured macho pride of some little old decrepit men.

But in the end, the die is cast: From now on, Cuba and the US will be good and respectable neighbors. Obama and Castro announced it barely a week after thousands of Cuban opposition members and civil rights activists were threatened and/or beaten and/or detained – but certainly all repressed – this past 10 December, International Human Rights Day, scarcely 90 miles from the North American coast.

However, to let Mr. Obama off the hook, it must be recognized, that 90 miles of open sea is too far for the President to be able to hear the cries of helplessness and the din of the crowds; to be able to perceive the intangibles of fear, pain from beatings, and the taste of blood.

This agreement being the prelude to the imminent implementation of the European Common Pact, we must face this certainty: As of today, we are left alone vis-a-vis the Monster. The fight is being observed by the world at a prudent distance. From now on, the liberty of Cuba will be, more than ever, our task alone.

*Latin for “the die is cast”
**“Gusano” (worm) is an insult hurled by the Cuban regime and its supporters to any person who has opposed the regime in any way, or who has left the country to escape it. The term has become a symbol of pride among opponents and exiles.
***”El Enemigo” (The Enemy) is a common epithet used by the regime, the state-run media, and supporters, when referring to the US.
****The writer is making a play on words, offsetting the Cuban slang word crápula (low-life) against cúpula, which literally translates as “dome” but is commonly used to denote those at the highest level of power.