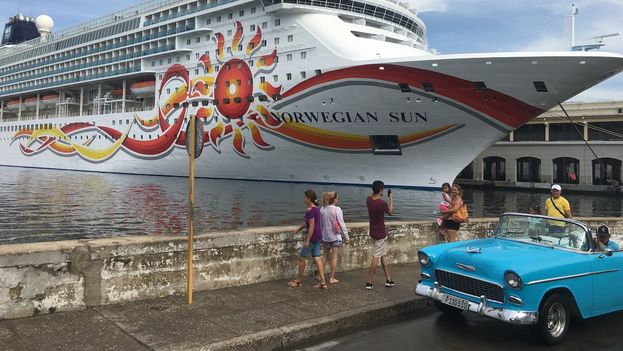 14ymedio, Marcelo Hernández, Havana, 20 August 2018  —  The gleaming behemoth docked in Havana Bay and, within a short time, dozens of travelers in sunscreen and shorts  began to pass quickly through the customs gate. Waiting for them were several buses to take them for a tour of the city arranged ahead of time.

From the moment when the ship appears on the horizon there is a constant coming and going in the area of the Sierra Maestra Cruiseship Terminal where tourist guides with signs in English and French present their offerings such as a program of “Salsa, Rum, and a Fine Cigar.”

A fisherman looked upon the scene with boredom. “They get off, walk about for a little while, and go back to the ship,” recounted the man who said his name was Sergio and he had once worked as an electrician. “That type of visitor doesn’t even have time to chat for a while so I don’t bother with them; I prefer those who come  more relaxed.”

One morning, with his fishing rod pointing to the dark waters of the bay, not only does Sergio catch some small fish to put on a plate, but also tips from tourists who want to take a picture of him or talk about the kinds of fish there are in their countries.

Nevertheless, with the travelers that arrive in big ships, he hasn’t had such luck. ” A cruiseship is a floating hotel that doesn’t even leave trash let alone money,” he lamented. “These people don’t sleep ashore, almost never eat in the restaurants and do little more than leave the ship to wait to get on a bus that takes them somewhere else.”

Sergio’s assessment coincides with the data from the 2016 Statistical Yearbook. That year, each foreign visitor spent an average of 765 dollars, while a cruise passenger spent only around 50. “For every $15.30 spent by a tourist who arrives on the island by plane, the tourist who travels by cruise ship spends $1.00,” adds a report prepared by The Havana Consulting Group (THCG).

“The income for the State is what the ships pay to dock inCuban ports but in terms of services, of course, they leave much less profit,” says Rodobaldo, a guide who works especially with Canadian cruise passengers.

“The client who arrives in this way does not need much from outside the boat because he has entertainment on board, so when he goes for a walk he does it for short periods and he only wants to go to places where everything is safe and well organized to get the most out of his minutes on land,” the guide explains.

“A bar, a place to dance and a museum, but they do not want to go further or risk getting into the depths of Centro Habana, or getting to know Alamar, leaving the city a bit to see something like the Botanical Garden or anything like that,” the guide explains to this newspaper. “It is a very isolated tourism that does not want risks of any kind.”

Some merchants near the port try to shape their offerings for quick visits. In the nearby San José dock, a handicraft and souvenir market has been serving “customers in a hurry” for months, as Liván Ramos calls cruise passengers. “They come and they want to get something before the ship’s siren sounds, so they pick up anything.”

At Liván’s stand there is a wide variety of products, such as an elderly couple carved in wood, the man with a bowler hat and the woman with an umbrella, for about $5.00. “These are in high demand among those who arrive on cruises as are the small canvases with images of the cathedral, the Bodeguita del Medio or the face of Che Guevara, which sell for $10.00.”

“We have collected the schedules for Royal Caribbean and other companies, so we already know that at least three times a week and after lunch they will drop by here in groups and in a hurry,” Ramos explains. “They do not bargain, they pay fast and even the bottle of water they are carrying has been taken from the boat,” he explains.

Ramos regrets that the infrastructure around the port “is still not very developed for the arrival of so many tourists.” In his opinion, “There is a lack of restrooms, places to sell drinks and more information points, as well as shaded areas.” The port also needs “urgent maintenance,” he says.

A private tavern, a few yards away, has placed a blackboard on its doorstep with the offers of the day that can be seen from the opposite sidewalk. The drinks have marine names like “Hola Ola” (Hello Wave), and “Velero Azul” (Blue Sailboat). “From the time the customer sits down until he has a drink in hand, is less than three minutes,” reads the poster advertising the cocktails.

The entire tourist geography of the area seems to have adapted to a type of express visitor who spends little. Tapas win the most complex dishes in the bars and restaurants closest to the sea, while sunny terraces are also more in demand than indoor air-conditioned ones.

“There are some who get off the boat and do not want to lose sight of it, so they ask to sit on the terrace,” says Malcom, who works in a small privately managed restaurant that has changed it offers to suit the new times. “No rice with beans, these people want fast and safe food like some fruit, croquettes, olives or snacks with cheese.”

Some young people eager to connect to the internet wait for cruise passengers and ask them for the login information for the floating wifi zone enabled on each boat. “There are people here who know that ‘the Royal’ has arrived not because they saw the boat but because with their NanoSation or Mikrotik (wireless routers) they can see the Wi-Fi signal,” explains Malcom.

“You need some user data to access the portal but any tourist will give it to you and once you get connected it works better than the Etecsa internet because it is very fast and without censorship,” he points out. “They don’t leave us with a lot of money but at least we save a few pesos we would otherwise have to pay to Etecsa,” the state communications monopoly.

Recently, it was announced that the Cuban corporation Aries Transporte signed a contract with the Turkish company Global Ports Holding (GPH) to expand and manage the cruise port of Havana. The agreement includes increasing the two cruise terminals currently operating to six. The details revealed do not include, however, any infrastructure other than berthing and passport and customs control for the ships.

Havana Bay still has large areas that are very deteriorated, with wharfs where there is only an old rusty structure and a narrow path that winds around the coast and makes it very difficult to bring in large buses like those for tourists. The increase in the arrival of cruise ships is making these problems even more evident.

The massive arrivals in the area began after the diplomatic thaw between Washington and Havana that began at the end of 2014. The United States relaxed some restrictions so that the ships passing through its waters also stopped at the Island and the Cuban authorities softened the previous positions of Fidel Castro, who demonized the cruise ships saying that they only left “their trash” in the places where they passed.

Last year the port of Havana received some 328,000 passengers and by the end of 2018 it was expected that the figure would grow to 500,000. But the first months of this year did not bring good news for tourism on the Island. The THCG report says that the first semester “has been traumatic and devastating for the Cuban tourist industry.”

Factors responsible for the fall in visitors range from a decrease in the interest in traveling to the Island, reinforced by the warnings from the US Government to its citizens; the damages caused by the weather, including hurricanes and droughts; and the stiff competition from other countries in the area, with cheaper offerings and higher quality services.

However, in the midst of this bleak scenario, “Cruise tourism enjoyed a 3% increase in market share compared to the same semester of the previous year, going from 12% to 15% of market share,” points out the THCG report released by economist Emilio Morales.

The rise in the number of cruise passengers is due, among other reasons, to the measure announced by the Donald Trump administration that prohibits Americans from staying at hotels or eating in restaurants managed by the Armed Forces, which control a large part of these services, through groups such the powerful military company Gaviota.

Cruise companies see a niche market and for more than a year companies like Carnival, Norwegian Cruise Line and Royal Caribbean have added dozens of new itineraries to the Island, including new ports of departure in the cities of Tampa (Florida) and Charleston (South Carolina).

The Royal Caribbean company launched a larger ship for its trips to the Island. The enormous Majesty of the Seas is 880 feet long and travels between four and five nights from Tampa to Havana, including day or night stays.

With a capacity for 2,700 passengers, the shining floating city has become part of the landscape of Old Havana at the entrances and exits of the bay. One of the trips organized by the shipping company brought Samantha, a young woman from Indiana, who was making her first visit to the Island.

She told 14ymedio that she was especially interested in the old town and on a trip to the Vigía estate, as part of a tour organized to the place where the writer and Nobel Prize winner Ernest Hemingway lived. She has no plans to return to the island for a trip with more time because she prefers “to travel several countries at one time” via cruise ship.

The Island’s private sector, which survives from small commerce, private restaurants known as paladares, and private lodging rentals, does not like this type of tourists who do not spend anything. In addition, a sector of the exile sees in those cruises an instrument to “strengthen the totalitarianism” and has launched the campaign “Do not help the repression” which describes this form of tourism as “illegal and immoral.”

In spite of everything, the number of cruise ships arriving in Cuba is increasing and some companies have announced new routes. This is the case for the luxury company Seabourn, which will operate routes from Miami and San Juan starting in November 2019, which will include nights in Havana and stops in Cienfuegos and Santiago.