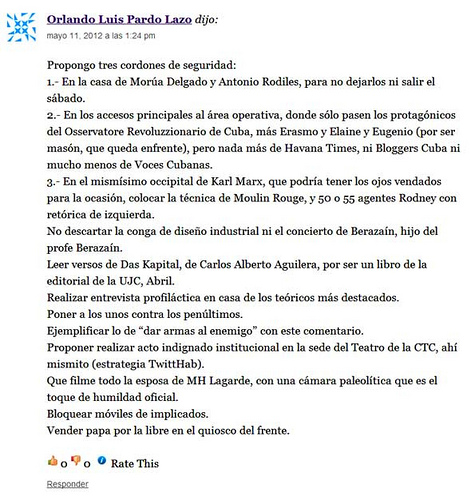 Translator’s note: OLPL developed these guidelines to help State Security do their job. It’s not known if they took his advice.

1 – At the home of Morua Delgado and Antonio Rodiles, so they can’t go out on Saturday.

2 – At the principal access points in the operative area where the protagonists of the Revoluzzionary Ozzervatory of Cuba will pass, Erasmo, Elaine and Eugene (being a Mason he stays in front), but no one else from the Havana Times, nor from Bloggers Cuba, and much less from Cuban Voices.

3 – In the occipital of Karl Marx who could have his eyes bandaged for the occasion, placed by the Moulin Rouge technician, and 50 or 55 Rodney agents with the rhetoric of the left.

Don’t rule out the conga of industrial design nor the concert of Berezain, son of Professor Berazain.

Read verses of Das Kapital, of Carlos Alberto Aguilera, for being a book from the UJC publisher, April.

Undertake prophylactic interviews in the home of the most prominent theorists.

Put the ones against the penultimates.

Exemplify “giving arms to the enemy” with this commentary.

Propose undertaking an institutional outraged act at the site of the Cuban Workers Union Theater, right there (strategy TwittHab).

Have the wife of MH Lagarde film the whole thing, with a paleolithic camera which is the touch of official humility.

Sell un-rationed potatoes from the kiosk out front.

Footnotes: The footnotes would have to be longer than the post. And in any event, jokes that have to be explained are never funny.