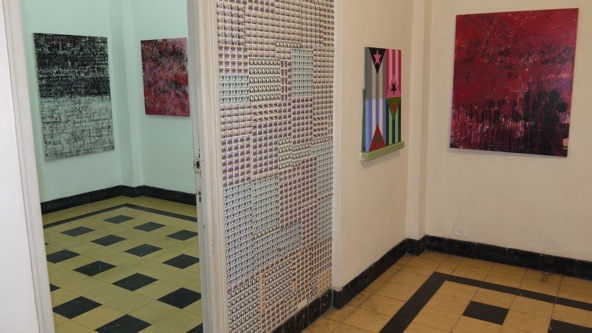 While I’m a Cuban author, sometimes I would love to be the political police.

Only they have all the information, omniscience obtained by legal means, or through crime under contract. Only they have absolute operability, all-powerful regardless of the mediocre bureaucracy and the little national swamp of ministerial resolutions. Only they have the diegetic sense in the midst of the chaos of has-beens crowing for or against the Revolution. Only they have, in consequence, imaginative impunity when the time comes to sweeten or destroy the fate of the Other (in fiction, these motivated lies are a source of verisimilitude).

As a Cuban author, what more could one ask for, with a literary tradition of a thousand and one mechanical unreadable realisms?

I would have loved, for example, to cite the painter Luis Trapaga for deceptions on Friday May 11th, cooking or coercing him with questions at the police station at Zapata and C (me out of uniform, an informal dialog between citizens), and then obliterate his work and his home with a future threat (a real official time machine): “If you show these pictures on your walls, the Ministry of Culture — and so says an agent outside the institution — will take drastic measures against you.”

I confess that with Guillermo Portieles and Nestor Arenas, his co-exhibitor colleagues of the space Open Studio The Circle (in the home of Trápaga: 10 # 316 (upper) between 13 and 15, Vedado), both fellow residents of the USA, the forecast for these experts was much bolder, with a gun: “Never again set foot on the land that bore thee, to collaborate economically with a counterrevolutionary leader…”

To the critics of Cuban art who, from an insolent intellectualism, privately make fun of the cops brought from the interior (hence the name of the ministry of the mysteries: Interior), I remind them that it would not be surprising that most the works of the Eleventh Biennial of Art in Havana have been negotiated in advance between the creator and security agent in charge of them (who treats them like a child or a patient or both). Without ruling out the possibility that the most controversial pieces are, in fact, conceived by the political police themselves (the Bruguera operation in the Kcho case could easily converge on the table of the same cultural commissar).

How not to envy the high degree of freedom, regardless of all ideology, religion and morality? Today, there is no more Open Studio in Cuba than that of the offices of Villa Marista, factual Alpha of the Cuban nation, Bible of  actions, Genesic navel of the short circuits about what is or is not Real.

Dealing with rebellious artists who in the end always throw a fit about what appears in the catalog (and sell, of course, the law of laws of the Truth). Appeasing self-managing anarchic-unionists who worship a bust of Havana during two stanzas of the badly memorized Internationale (perhaps the Indignationale). Barring women dressed in white so they cannot prop up the skies of Cuba with their flowery swords. Savoring the rhetoric of repression with none less than the purple-robed Cardinal of the perennial smile. Denigrating the dead who stopped eating to escape the ubiquitous cruelty of the prison cells. Tapping the phones of foreign investors and of the entire Council of Ministers. Operating the internet with a private cable of optical fidelity. Annexing yourself to Venezuela like another special municipality while buying food on the sly in the USA (where Guillermo Portieles and Néstor Arenas are deported, while sequestering the canned body of Alan Gross).

What spectator of the country could resist such a package of spectacular paradoxes? Please, let’s not be hypocrites or excessively modest. The only excited official in the midst of the professional apathy of this Island bears the boastful initials of State Security.

Anyone now passing by the little Art Deco apartment at 10 # 316 (upper) between 13 and 15, Vedado, will not find the remnants of the group exhibition: the only things hanging are the old canvases of Luis Trápaga, abandoned to his fate of autistic artist by Portieles and Arenas,who, instead of burning their ships (or their canvases as a performance in the Plaza of the Revolution), preferred an untimely withdrawal that, just the same, can no longer save their passports from ostracism. Instead of going to authorized galleries and reclaiming their works (still frozen at airport customs), better they might take advantage of these days to go, saying goodbye to Cuba, until the end of the Ministry of the Interior: that is, until the State eternity, because our first anti-democratic capitalists can’t allow themselves the luxury of giving up this organizing organ.

As long as there is this marvelous narrative technique called the Permission to Enter and Leave (the pinnacle of governance over the characters of our national novel), we Cubans will be puppets without credibility: art and love and friendship and family and work and creed and all the rest will be no more than a stupid et cetera. That is why, in these kinds of sub-socialist Cuban-style TV series, State Security’s is the only one that can count on an audience for a great many more seasons to come. And isn’t that precisely any author’s dream of a best-seller?