14ymedio, Luz Escobar, Havana, 12 May 2016 – Havanans enjoyed a certain freshness twice this weekend. Not only did the thermometers drop a few degrees, but the emblematic Coppelia ice cream parlor, located in the heart of the capital, reopened its doors after being closed for repairs for several weeks. The work is part of the 50th anniversary celebration of this famous place, which is commemorated on the 4th of June.

The reopening of Coppelia has given rise to many reports in the official press. Last Friday, the place was visited by a select group of officials and later the public was allowed in. The customers could see that after a new coat of paint and the revitalized green areas, the quality of the ice cream sold in Cuban pesos continues to be low.

On Tuesday afternoon, a long line extended under the sun outside what is commonly called the “Cathedral of Ice Cream.” However, those who knew the centrally located place in its first decades of life complained that the remodel has not been accompanied by an improvement in the products, either in its presentation or in its flavor and variety. 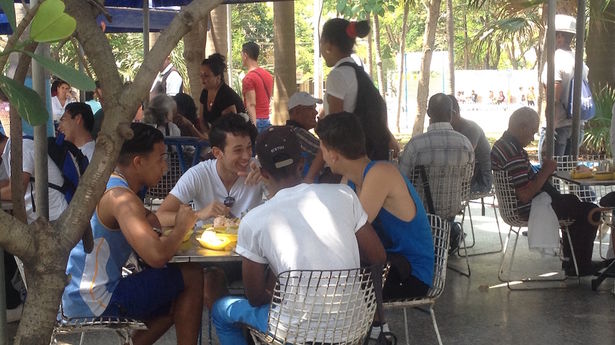 A man about 60 commented that the ice cream was “watered down,” he had tried the combination known as a “salad” which is five scoops and some cookies. The man couldn’t stop laughing when near his table a young man exclaimed he was amazed that Coppelia had returned with “a pile of flavors<’ because on the menu you could read that they are selling chocolate, curly chocolate, vanilla and strawberry.

Melancholy, the customer then evoked the original menu that distinguished the most famous Cuban ice cream parlor, when there were 26 flavors and 24 possible combinations. The difference is not in the quantity, but in the deterioration of the quality of the ice cream, that sometimes has bits of ice in it, little flavor and no pieces of natural fruit, like the strawberry, the orange pineapple and the mango they used to have. 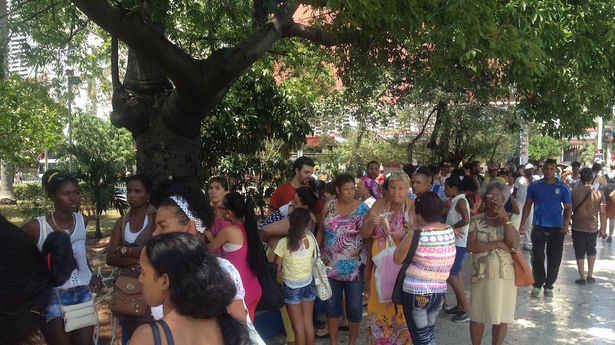 To the annoyance of the customers, the place keeps some traces of the “workers diner” that it was during the Special Period. For example, you have to share the tables, there can’t be any vacant chairs, and it is not always pleasant to sit with strangers.

On the top floor, known as The Tower, and beautifully designed by the architect Mario Girona, they still limit sales to “two specialties per person” according to an employee. However, with a couple of bill slipped into the right hands, a customers can take home all the ice cream they want, always with the stealth of “not filling the cups in view of the bosses,” says the waitress.

One of the new features much appreciated after the closing is the white earthenware dishes in The Tower that replace the plastic ones, which, however, remain in the so-called “courts” down below. In the first week of the reopening, all the employees who serve the ice cream haven’t learned how to serve the ice cream in hollow scoops, a unique specialty of selling ice cream in Cuba, and that has characterized the celebrated ice cream parlor for years.

“Let’s see how it is three weeks from now,” said a distrustful mother who took her two little kids to have ice cream at 23rd and L, the most famous corner in the capital, this Tuesday. The woman sneered that “the cookies that are supposed to go with the ice cream are where they’re supposed to be, on the plate,” but “in a few days they’ll be back in the hands of the resellers outside the courts selling for extortionate prices.

A group of tourists naively asked customers why they were lined up a few yards from a completely empty area selling the most varieties of ice cream. A young college student, who was with a group of students from the philosophy school, explained to the foreigners the difference between consuming things in Cuban pesos versus Convertible pesos. “The one in chavitos (convertible pesos) is better, but there’s no one who can afford it,” said the young man.

The areas that are refurbished now are the The Court and The Tower, along with the imposing white staircase that leads to the upper level, the dome, the roof, and the typical wood and glass windows, also located on the upper level. The refurbishment program includes spaces such as the bar on the ground floor and the bathrooms, which will begin to be restored in the coming weeks.

However, for many customers the improvements should not remain in the physical appearance of Coppelia, but should be targeted to recovering the prestige it once enjoyed, now “watered down” like its ice cream, poor quality, unprofessional treatment by its employees and the absurd measures implemented in its services, including the closure of the beautiful passage to passersby. From now on, you can only enter after standing in the long line outside the Cathedral of Ice Cream that seems to have lost its way.