An eye for an eye makes the whole world blind.
Mahatma Gandhi

After having taken a personal inventory of 2012, I’ve seen that the GECAL workers were more offensive than usual, and although we tried by all means, it was impossible to avoid confrontations. In mid-December, the situation worsened to the point where the threats escalated after the arrest and release of the independent lawyer Yaremis Flores.

At first I came to think there were prejudices and paranoia were it not that one of the most aggressive neighbors we had, said threateningly:

“The U.S. blockade doesn’t put ’this’ (the country) bad, but the internal counterrevolution!,” he shouted at the top of his voice while he stared at me, and I tried to calm my husband down.

We don’t allow ourselves to be provoked and so everything was left the same. That same day, around 11:00 in the morning, some GECAL workers, friends of the neighbor who shouted at us, began to walk around and put boards in the old backyard of the house, which adjoins the bathroom window and the kitchen. I talked to them beside the toilet and asked them to please not put anything there because that area is under litigation, the bathroom window is really low, they have plenty of room elsewhere, etc.

The request was what they needed for the crowd to grow and to begin uttering threats of hitting me. They even said that if I dared to call the police, the punishment would be worse. Good thing I decided to be quiet and move back just in time. That way, I couldn’t even see their faces, but we heard the shouting and the insults.

Although we carried on with the childcare activities, at dusk I made a complaint at the Aguilera police station. What goes around comes around… a few weeks later I refused when they tried to convince me to drop the charges.

So, a sad 2012 Christmas came to my family. As a complement, I had an interview with the municipal director of the Ministry of Labor and Social Security in Diez de Octubre, where I had the opportunity to explain the reason for the prestige achieved by the daycare centers served by ACDEI. This academic year 2012-2013, the first group of preschoolers started school successfully.

The official asked me repeatedly how the idea came up to establish private nursery education. She said that officials of theDiez de Octubre Municipality of Education claim that I must go through the pre-school learning methodology. No surprise if it’s true what they say. Lying is a very popular business tool in this island. Our project is based on an NGO, the Cuban Association for the Development of Primary Education (ACDEI), which is about to be approved. At the headquarters of the Ministry of Justice (MINJUS) they angrily asked me the same thing:

“How did you get that idea?”

More surprises cause us to worry:

1. The children learn in appropriate conditions.

2. The owners and their employees gradually become educators.

3. We don’t charge for our services to the daycare centers.

4. That there be advocacy and outreach to the citizens of the Convention on the Rights of the Child.

In Cuba, being a Cuban citizen and defending our rights irritates the State. Any state entity thinks they are better than the ordinary citizen.

Gecal’s attitude is no exception, it is the rule. Months ago the police had explained to that constructive government group, in particular its director, that until the sentence is carried out in that area they can not perform any activities, or use it as their own. A bad memory? Yes, particularly when the applicant is a civil society activist who speaks to the public about the reports of the Committee on the Rights of the Child.

Regarding the continuing threats, it’s not long until we get used to it. The verb “to threaten” is used a lot in Cuban society.

He or she threatens, 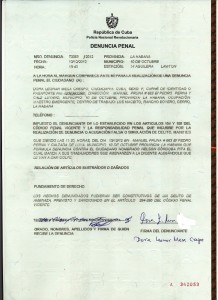