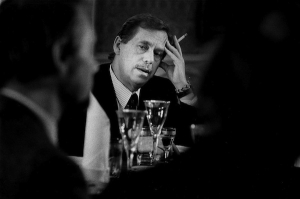 A year after his death how does Cuban civil society view the former Czech president?

In 1977, for me, just as presented in the official propaganda, the future seemed to belong entirely to Socialism. We spoke of “discovering” our African heritage; being internationalists was to pay our debt to humanity. Deeply immersed in Africa, if the press gave any mention to Charter 77, if in some twisted interpretation they spoke of its imperialist background, it went unnoticed by me.

At the end of 1989, when neither I nor anyone else had any idea that coming our way was the continuous blackouts and terrible food of the Special Period, still shocked by an embarrassing trial of several undisputed military heroes [of General Ochoa and others], back in our sister state Czechoslovakia there was a new government and a new president and — Oh! — the new president wasn’t a Communist.

The news that came out of Europe was fragmented, confused and almost always late. And by then I was skilled in the Granma-speak of our only newspaper, and it was easy to realize that if the meager newspapers of that time didn’t speak about the countries of Eastern Europe, they were doing very well.

Czechoslovakia disappeared first from the pages of Granma and then from the map of Europe as it quietly divided itself. Charter 77 was still an unknown document, and not to offer a comparative biography, I will summarize. It wasn’t until I accessed the internet for the first time, barely three years ago, that Charter 77 ceased to be an unknown to me.

Admirable in the context in which it was developed, at this stage it is not a new document. The defense of human rights has been a constant demand on the part of civil society. The Demand For Another Cuba, for the ratification of the UN Human Rights Covenants, is a younger sister of the Czech initiative, and as one, is a target for the pressure of the repressive forces and international sympathy. Documents like this usually exist and are subversive only where human rights are not fully realized.

To speak of Charter 77 and not of Václav Havel, would be a crime of omission. If the document is admirable, it is mostly because of the greatness of the men who promoted it (Jan Patocka, Havel). Over the years, Havel became a powerful man, but never ceased to be a citizen who felt deeply. Although I’m not even sure I would have voted for him for president, I’m in tune with his ethical concerns, I appreciate his interest in the human rights situation in Cuba.

Let this be a tribute and reminder of the role of intellectuals in society. Of the decision to live without lies.