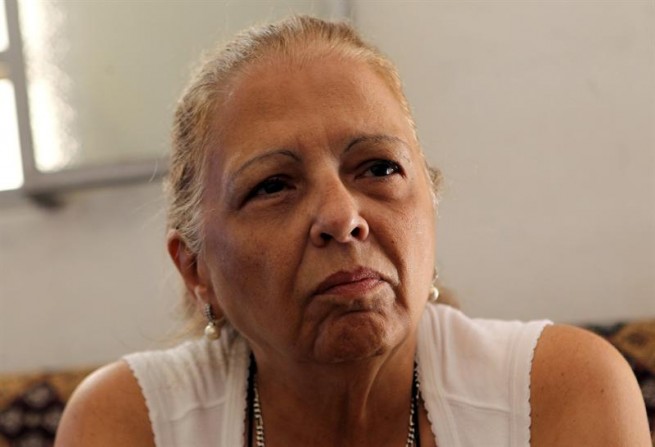 By: Ignacio Estrada Cepero, Independent Journalist. [Note from Translating Cuba: The strike discussed here was successful and is now over… our apologies for not translating this article sooner.]

According to the economist, this hunger strike’s main objective is to obtain Jorge Vázquez Chaviano’s immediate release from prison. Chaviano is serving a sentence in the high-security prison La Alambrada located at 9 km from the town of Manacas, municipality of Santo Domingo, in the Villa Clara province.

During the conference, Roque Cabello presented evidence, in the form of several filed case documents reviewed by the organization “Network of Community Communicators,” a group she presides over, that Vázquez Chaviano was supposed to be freed last Sunday, September 9.

During her appearance, the well-known dissident also addressed other issues, particularly with respect to the ongoing actions against Human Rights (HR) activists and Cuba’s internal opposition groups carried out by the State Security, actions that violate the socialist state’s laws. Roque Cabello gave several examples such as police raids, surveillance, the retention of identity cards, arbitrary detentions, as well as other violations like the forced entries into Human Rights activists’ homes, planned arson, and the demolition of homes as some of the most recent cases.

Marta Beatriz, who is 67 and has diabetes, expressed that she will not accept any kind of medical assistance offered by the government during the hunger strike, tube feeding and resuscitation included. During the protest, a group of women will stay with her at home and provide live information about her health.

A group of 11 people from all around the country, among them opposition leader and ex political prisoner Jorge Luis García Pérez (Antúnez) has joined Beatriz Roque in the hunger strike.

Among the strikers, the most worrisome health conditions are those of Idania Yánez Contreras of “Coalición Central Opositora”, who moved to Havana to support Roque Cabello, and dissidents Alberto Reyes Morales and Luis Enrique Santo Caballero, both with one kidney, who remain on strike at the home of Damaris Moya in the city of Santa Clara, Cuba.