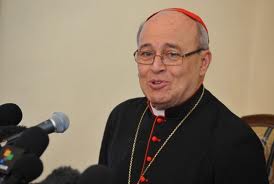 After I read and reread the editorial in the latest edition of the journal Lay Space, the publication of the Archdiocese Lay Council of Havana, entitled: “Commitment to Truth,” it left a nasty taste in my mouth, because the editorial echoed the same accusations — against the peaceful internal Cuban opposition — as Castro’s totalitarian regime has been making all along.

Also, it tries to exalt, as a paradigm of democratic struggle in our suffering country, Cardinal Jaime Ortega, Archbishop of Havana, and also to pretend that the editorial speaks in the name of the Cuban Catholic Church and not of the Editorial Board of the above mention Journal of the Laity.

It is well known that there is everything in the vineyard of the Lord; in addition, like good children — good neighbors — we all have strengths and weaknesses, and make mistakes as the human creatures we are. But still, to my knowledge, Cardinal Ortega has not died, and therefore has not been raised to the altars. So, gentlemen, why are you getting ahead of his death and canonization.

Moreover, as in the wise saying: “He who imitates fails”; and you have imitated the masters of the Palace of the Revolution in their unhealthy attacks against civic fighters. And that’s ugly, they should have their own opinions and not “little borrowed phrases.”

Personally, I am Catholic by training and education at the prestigious College of Marist Brothers, here in Ciego de Avila, and I respect and admire the Catholic community, both nationally and internationally, and all Christian and non-Christian denominations that love peace, truth, freedom, justice and love. I wish that God and the Blessed Virgin of Charity bless you and protect you. Amen.

The thinking of José Martí, our Apostle of Independence who, in my opinion, is a paradigmatic spiritual guide for our noble, dignified and peaceful civic struggle for respect for the rights and freedoms inherent to the dignity of the human person which, in a very stubborn way, are violated by Castro’s totalitarian regime.

This Martí thinking faithfully maintains its essential force in the midst of a tremendous crisis of fundamental values in contemporary Cuban society. I quote:

“Whomever sees his people in disarray and agony, no door visible to wellbeing and honor, either looks for the door or is not a man, or at least an honest man. He who is content with a situation of villainy is its accomplice. He is its accomplice whomever considers the remedy he preaches insufficient or impossible, and with a lie in his soul, continues to proclaim the insufficient or impossible remedy. Tyranny is not demolished with those who serve out of fear, indecision or selfishness.”

And there is no other alternative, if you want to live in freedom and democracy, to continue forever, going forward and without hatred or rancor and without the infamous vendetta in the honorable civic struggle to achieve the urgent and necessary transition towards a new democratic and genuine Cuba, where we can achieve the true rule of law and the masterful ideology Martí “with all and for the good of all.” Amen.

Note: Pedro Arguelles Moran, is a former Prisoner of Conscience member of the group of 75 prisoners of the Black Spring of 2003.